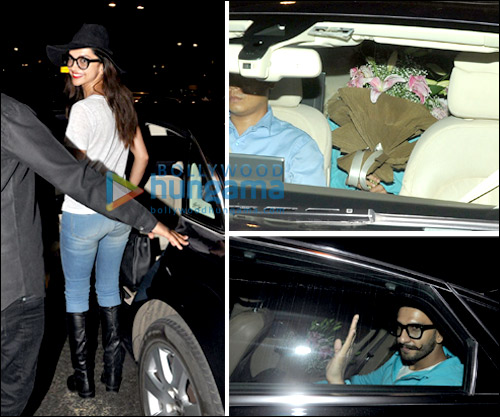 Though neither of them has spoken about their much speculated relationship, many believe that Ranveer Singh is smitten by Deepika Padukone. The actor, however, has always maintained that he shares a great chemistry and is really close to the actress. On the other hand, Deepika, too never refrains from praising Ranveer and his super-enthusiastic nature.


While their love story has been the cynosure of media for a couple of years now, Ranveer Singh was recently seen expressing his special feelings towards his Bajirao Mastani co-star whilst she arrived to Mumbai early in the morning, at around 4 am. Deepika Padukone was returning to the city after holidaying with her family. Ranveer, who had just returned from a city multiplex after watching Bahubali, decided to surprise his so called 'ladylove' and landed on the airport with a bouquet of flowers. Though the actor decided to cover his face with the bouquet but alas, the cool blue sweatshirt that Ranveer had worn while watching Bahubali, gave away his identity.