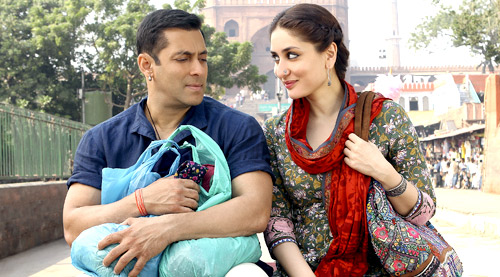 My mother and I cried, as Bajrangi hugged Shahida at end of the film. The power of love was overwhelming and everyone in the audience seemed to choke up. Bajrangi Bhaijaan had worked for us at multiple levels, the most profound reason being the most silent.


Here is a film that on the surface is about a Man helping a little girl find her home. But the film is a mighty tribute to the conjoined twins- India and Pakistan, the most poignant till date. A Hindu Indian man travels to Pakistan to help a Muslim girl go back to her parents. The reality couldn't be more ironic and heart wrenching- Bajrangi is in real life, Muslim superstar Salman Khan where as Shahida is a Hindu child Harshaali Malhotra. Incidentally, Salman's mother is a Hindu. The film has been directed by a Muslim filmmaker, Kabir Khan, whose father is a Pathan and mother is a Telugu, and Kabir himself is married to a Hindu and the film has a Hindu leading lady Kareena Kapoor Khan who married a Muslim!


The end of the film is one of the most symbolic I have been in recent times. Bajrangi and Shahida stand in the middle of the river, on No Man's Land, between Indian Kashmir and Pakistan Occupied Kashmir. It reminded me of Toba Tek Singh, Saadat Hasan Manto's short story, except that in this case, if we inverse the satire and colour it positive, at some level, it appeared that our Cinema is on No Man's land. It belongs to no one and yet to all of us irrespective of where we come from, our religious allegiances notwithstanding. Our three superstar Khans, who have been blessed with mighty love of the audiences for more than two decades, have such interesting life stories- Shah Rukh married a Hindu Gauri Chibber, Aamir is married to a Hindu Kiran Rao (His first wife was Reena Dutta) and Salman's mother is a Hindu as mentioned above- Sushila Charak. It is another matter that Salman's artistic talent as a painter has seen him excel most in the portraits of Jesus Christ. Their success points to just one thing- religious divide is just skin deep. Cinema runs far deeper in our blood and in a lot of ways represents who we are intrinsically.


Bajrangi Bhaijaan, therefore, celebrates the true essence of India. The idea of India that extends far beyond the right wingers who want to divide the country in the name of Ram and Rahim. The film industry is a melting cultural pot where the only religion is love for films and nothing else and all of it for a film crazy nation.


Historically the Pre-Independence Indian Subcontinent (India, Pakistan, Nepal, Bangadesh, Bhutan and Sri Lanka) has been deeply rooted in secularism and pluralism because we have been nurtured by different faiths and traditions. We have witnessed many kingdoms and many wars- Be it our language, our festivals, our cultural upbringing- tolerance, acceptance and a multi-religious world view is ingrained in our DNA, and nothing celebrates all this and more than Bajrangi Bhaijaan, especially at a time when the political establishments on both sides of Indo-Pak border are flushed with testosterone.


Love is the biggest antidote, Love has its own language, Love like that of Bajrangi-Shahida belongs to the No Man's land between India and Pakistan and therefore to both the nations. Let love speak. Come, celebrate Bajrangi Bhaijaan for this very reason.