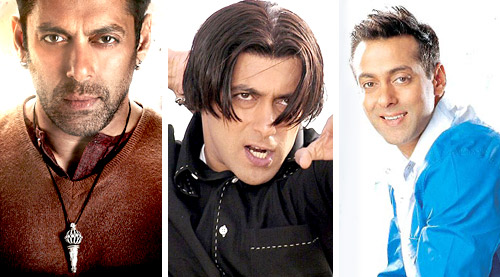 Khan played the bratty lover-boy trying to earn a decent living with Ã©lan that catapulted him to instant fame. The film

2. Love (1991): Salman's wettest weepie ever, it featured him as an abused child who falls in love with the

charming Maggie (Revathy) only to lose her to death at the end. Sob.

3. Saajan (1991): Salman Khan lost the girl to another man. He played the rich playboy who finally loses Madhuri

to Sanjay Dutt in Saajan, he made sure he got her in this film even though a calamity stuck the happy family threatening

to tear the lovers apart.

5. Khamoshi: The Musical (1996): It was Manisha Koirala's film all the way. The script favoured her character as

she tried to connect with her deaf-and-mute parents. Salman as Manisha's silently supportive love-interest provided a sense of

comfort and joy in the girl's oppressive world.

loving kid-brother who follows her into her marriage and sasural as part of her dowry. Sweet and emotional.

arranged marriage rather than walk away with her lover. Salman's emotional breakdown at the end with his screen-mom Helen

(who's also his father's second wife in real life) was a hanky-drencher. Salman tried his best to convince the director Sanjay

Bhansali to allow the script the freedom for Aishwarya to walk off with Salman instead of Ajay Devgn. Salman even took Sooraj

Barjatya's help to convince Bhansali. But nothing doing. Salman was never destined to get the girl.

8. Tere Naam (2003): Salman's most emotional film to date he plays a reformed ruffian whose love for the

unattainable and pure girl lands him in a mental institution. Many consider this Salman's finest performance. But only if

you've not seen Vikram in the original Tamil film Sethu.

9. Phir Milenge (2004): Why on earth actress-turned-director Revathy cast her Love co-star as an HIV positive is

a mystery. A tragic case of miscasting.

10. Bajrangi Bhaijaan (2015): Salman Khan takes a lost little girl back to her parents in Pakistan. Salman and