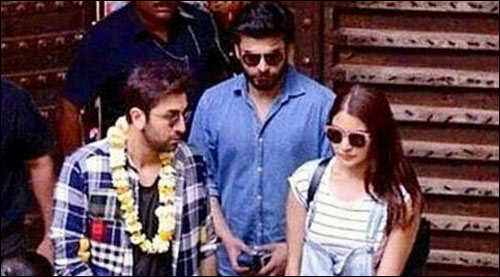 Earlier we had mentioned that the lead cast of Ae Dil Hai Mushkil, namely Ranbir Kapoor and Anushka Sharma along with Fawad Khan had kick started a shoot schedule in Rajasthan. While we got a glimpse of their shoot avatars, here is yet another picture from the sets of the film.

If the recent picture is anything to go by, it seems that the cast is getting a taste of the grand Rajasthani hospitality wherein Ranbir, Anushka and Fawad are receiving a warm welcome with the Kapoor lad even sporting a garland. On the other hand, Anushka who was earlier seen in a traditional avatar during the shoot schedule in Rajasthan has ditched the ethnic look and has opted for a chic and trendy one. Fawad Khan too is spotted with the duo. Though the details of their characters are still under wraps, we believe Fawad too is an integral of their schedule in Rajasthan.

Ae Dil Hai Mushkil also stars Aishwarya Rai Bachchan along with a cameo of Pakistani actor Imran Abbas Naqvi. The film, that has been subjected to several speculations about the plotline, is directed and produced by Karan Johar and is slated to release on October 28.