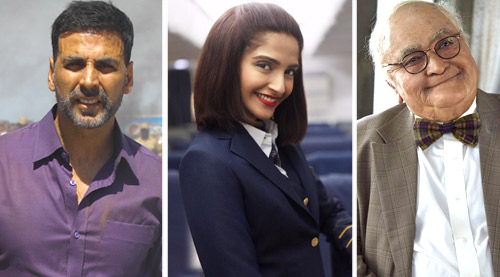 Three films-Airlift, Neerja and Kapoor & Sons-are all we have to rescue 2016 from disaster until now. But for these, the field is barren, and there have been only tepid successes and no blockbusters even in English, which is the only other (near) pan-Indian cinema we have.

In Hindi movies, a spectrum as big as from Ghayal Once Again (a fresh and gripping film that, however, could not recover its massive investment) and Jai Gangaajal (which also lost money despite a slim budget) to the critical hosannas-winning Aligarh, did not excite audiences, leading to this sorry state.

And though, optimistically, we can hope for significant improvement in the coming weeks with Ki & Ka, Fan and Baaghi (besides the English Kung-Fu Panda) and later in the year with Dishoom, Sultan, Raaes, Rustom, Shivaay and Dangal as surefire audience-pullers, the scenario is in no way as golden as it was in 2015.

Yes, there is one argument whose validity is limited: as Rishi Kapoor says and many concur, "Indian cinema is finally coming of age. How long can we take the same old stuff?" Badlapur, Dum Laga Ke Haisha, Tanu Weds Manu Returns, Piku and Bajrangi Bhaijaan are mentioned here as the torchbearers of cinematic evolution along with the three films released this year. But when did even five swallows out of 200 make the proverbial summer for the industry?

The counter-argument here, on the other hand, is extremely valid: that a film must be made and marketed in the correct budget considering its level of appeal (story and subject, treatment, cast, musical scope) and must engage and entertain audiences. Mirani points out the classic case of Dum Laga Ke Haisha last year and Neerja this year: "They had no big names in the cast, but everything fell into place and the audiences connected with these stories."

On the other hand, critics' darlings like Aligarh or last year's Masaan and Margarita With A Straw just did not spark any interest, despite the lavish ratings and boosting by 'celebrity critics'. Aligarh, in particular, was, for its scale, probably a bigger fiasco at the box-office than even Bombay Velvet! Getting down to basics, what use is media-hype when people have decided not to watch a film?

The malaise, in all honesty, also extends to commercial films. Trade analyst Vinod Mirani says bluntly, "No one else will say this, but it is a fact that many of the so-called money-spinners last year lost money for distributors."

However, another industry observer points out to the changed distribution and revenue models and stresses that the mathematics of calculating whether a film is a loser or not is nowhere as straight as what it used to be. The traditional way of expecting 40 to 45 percent of the incoming (nett) revenues to equal the cost of a film no longer applies to every movie, especially with corporate involvement. It is more film and deal-specific.

The Role of the Multiplex
The multiplex revolution has come in slowly but steadily. In the late '90s, this term was applied even to new, premium single-screens with a new experience in everything from seating to picture and sound quality. Gradually, it extended-by its true definition- to multiple screens within the same complex. But in 2004, Farah Khan had made the perceptive remark, "Multiplexes are going to destroy the film industry." Let us analyze the multiplex phenomenon to see if she was bang-on!

Today, except for some towns, the rates can go from Rs 250 to as high as Rs 1200 or more per ticket, with some 'plexes luring customers by including food and beverages within the amount. And while Amod Mehra scoffs at the price being a deterrent ("Who says they do not spend? People are buying tickets, right?"), Mirani says that the 'plexes are designing their own doom: "Now there is a new system in place-of grading even multiplexes, like single-screens used to be classified. But how many people can afford to watch movies every week like this?"

And this is true, because in the past, many bad to intolerable movies would make money, because a filmgoer could afford to spend up to Rs. 25 (or less) per ticket. But now a multiplex visit for a family of four cannot be done, on an average, in less than Rs 1500 to Rs. 2000, including snacks, which is too much of a risk if a film disappoints, or even as a weekly budget for a family.

The A-grade 'plexes thus have only snob value, Mirani feels. "And despite overcharging for everything, including snacks, they still use dated 2K projection systems. In countries like USA, a 4K system is now mandatory. And all these things are one-time investments. And theatres cannot be Toll Nakas!"

Mirani adds that these are the screens that have to cut down shows when business does not add up due to bad films. "Despite all the hype, there is sparse creativity today in films," he says. "Content is poor, including the music about which the less said the better! One of my distributor friends up North owns 21 multiplexes. And all are screening Rocky Handsome. Even if a film is good, he will exhaust the audience within three days by having shows in different screens."

In such a scenario, 'plexes suffer as much from bad films as vice-versa. "But the scenario was so bad for recent weeks that even some single-screens were cancelling shows!" points out Mirani, while admitting that this is a rampant phenomenon in 'plexes. This actually nails the oft-propagated myth that offbeat films find a savior in 'plexes-for if single-screens do not take up such movies, the 'plexes screens them, as it turns out, only in theory!

Mirani also asks why should a film buff pay as much for an appealing films like Bajrangi Bhaijaan or Tanu Weds Manu Returns as for something not as enticing, like Aligarh? "It's like asking someone to shell out the same fares for a bus, a cab, a train and a 'plane!" says Mirani. "The need of the hour is 'janta-plexes'-affordable state-of-the-art 150 to 200-seat theatres with 4K that can survive even cinema that has fewer takers."

Plight of the Audience
However, sadly, many myopic celebs opine that as long as a story-driven, fresh movie makes good profit and maybe even a hundred crore, the frontbenchers are dispensable, for they will anyway keep watching the lowbrow kind of cinema that will always be made for them.

On a harsher note, years ago Manmohan Shetty had told this writer, "Cinema tickets will rise. Those who cannot afford will have to subsist on television serials."

We all know that the single-screens still outnumber the 'plexes in multiples and yet the revenues from both are almost in reverse proportion. After all, how many movies are made today for the pan-Indian audiences? The shocking answer is: less than one every quarter!

So, are the audiences important at all in today's scheme of things in the broader sense of the term? For at the other extreme, so to speak, of Aligarh, is a film like Teraa Surroor that recovers its money before release by way of multiple rights. In theory, such films will be break-even even if a single person does not view it in a movie-hall. And the word-of-mouth too will be of little importance. And such movies will continue to made, without a thought for broad-based appeal, like many of Mukesh Bhatt's films as well! So what happens to the poor film buff apart from the halls screening such films?

By tradition, Indians are addicted to movies and cricket. But today, they are in the greatest danger ever of losing out on the first, unless the industry corrects its vision from short-sight to long sight!