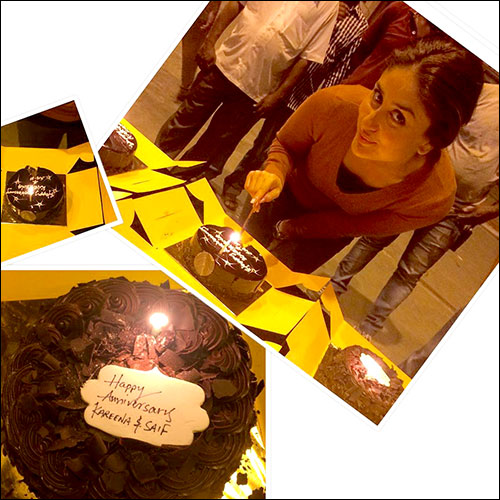 Saif Ali Khan and Kareena Kapoor Khan have been one of the most sought after couples in Bollywood. Whilst their life has always been in spotlight, the two have completed three years of blissful marriage today, on October 16. Though the two are busy with their respective career commitments, the team of upcoming film Ki and Ka made the day special for Kareena Kapoor Khan.


The actress is currently busy shooting for Ki and Ka along with Arjun Kapoor and on the eve her wedding anniversary, it seems that work was on Kareena's mind. However, the team of the film celebrated the occasion in a lavish way and her make-up artist Pompy Hans posted a collage of the celebration on his Instagram page saying, "On set of Ki and ka cutting anniversary cake of Kareena kapoor khan". The picture has the special cake that was ordered for the occasion along with Kareena who is cutting the cake. Moreover, it seems that the team had ordered for about three cakes marking anniversary of Saifeena (fans fondly call Saif and Kareena as Saifeena).