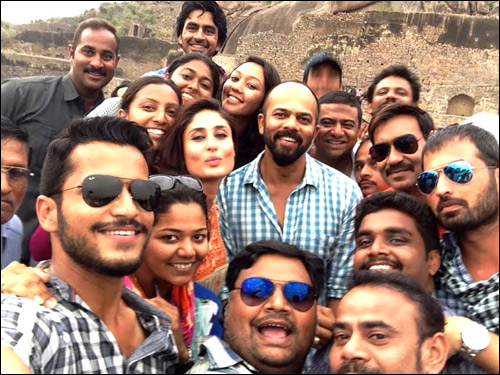 Selfies have created a furor among celebrities and the word even made it to the dictionary this year. While many stars have taken to social networking sites, the Kapoor Khandan kids, be it Kareena or Ranbir, have stayed away from it. However, they too seem to be struck by the selfie fever.

Kareena Kapoor will be seen clicking a selfie in her upcoming film Singham Returns. The scene in question has Kareena sitting with a restaurant owner and chatting away to glory with him. Also, to improvise this scene, Kareena impromptu decided to click a selfie with the owner. Since it suited Kareena's role as the bubbly and talkative girl, filmmaker Rohit Shetty too decided to incorporate the scene in the film.

A source close to Rohit Shetty confirmed and said, "Yes! It was totally impromptu of Kareena initiating to click a selfie, it was a jovial conversation which the two of them have in the film and Kareena just improvised it by clicking the selfie and has made the scene look even much better, to know more you will have to wait for the film!"

Meanwhile, we bring you a picture from the film set, where the cast and crew posed together for what looks like a selfie shot by a crew member.

Produced by Ajay Devgn and Rohit Shetty, Singham Returns, a sequel to the popular action drama Singham also stars Ajay Devgn, Amole Gupte, Anupam Kher in prominent roles. The film revolves around black money and smuggling and is slated to release on August 15, coinciding with the celebration of Independence Day.