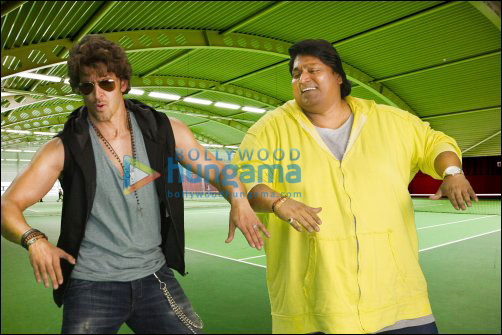 Earlier we had reported that Bollywood personalities like Amitabh Bachchan, Akshay Kumar, Ranveer Singh and Govinda had shot a song sequence for Ganesh Acharya's film Hey Bro. Now we hear that the latest actor to join them is Bollywood's Greek God Hrithik Roshan.

In fact Hrithik Roshan shot for his part recently in a song titled 'Birju', and by the look of it, the song has the hip hop feel to it, and Hrithik is seen grooving with none other than Ganesh. As for roping in Hrithik Roshan for this appearance we hear that Ganesh who has previously worked with Hrithik on films like Krazzy 4, and Aap Mujhe Ache Lagne Lage approached the actor who readily agreed to shake a leg for one of his favorite choreographers.

Hey Bro that is being produced and directed by Ganesh will also feature the choreographer as an actor along with Govinda.