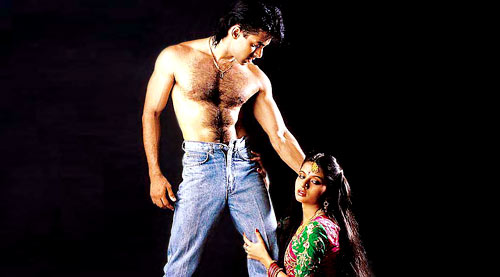 You know how there are those things you have seen in films and taken them as gospel truth... until they come to bite you! Here is a list of my gospel truths that taught me a lesson or two in lifeâ€¦

"Dosti mein no sorry, no thank you"

Sounded so charming when we heard it for the first time in Maine Pyaar Kiya, didn't it? I always thought I have found a litmus test for my friendships. If I can have a friendship with someone without using these two expressions, it means my friendship pure and true and will stand the test of time.

I am a living example of a person who ignored a good deed and forgot to apologize and tried to pass it off with the same verve as Prem, only to realize that I have very few friends left! When I tried to reason with them, I was often told I'm being rude. What?! Haven't they seen MPK?? How can they not know the usool of dostiâ€¦

But good judgement prevailed. I started using sorry and thank you, a little too much maybe, but at least I'm not rude anymore.

The dog always knows who the bad guy is.

Have you noticed?? In every film, the family dog only barks at the bad guy, many a times even aiding the police to grab him and take him into custody. It happened with me too...

Once I went to a director's house for narration. I was already nervous. I was sweating profusely. And as soon as I entered, I came face to face with the family dog.

I got more nervous now.

First question that popped into my mind - Will it see the good in me and be nice or will it think I'm some sorta villain, atrociously trying to sell my script and bark? As if on cue, the dog started barking and just wouldn't stop. The director shushed his pet and I started narrating. The beloved canine, for some reason, was just not in the mood to stop voicing its disapproval.

The way the dog was barking at me, even I was convinced that I'm evil. Obviously, I couldn't sell the script. Furthermore, I was even contemplating to alter my career option to becoming a villain.

Every man who comes to Mumbai from a small town has to walk past VT station.

The aerial view of the splendid British Architecture standing glorious on early morning.

The VT station! I would get off the train and cross the street with a tote bag and Bombay would embrace me as its own. That's what we see on the silver screen. And that was the welcoming scenario I was expecting all along from the time I decided to come to Bombay. I was ecstatic when I called my friends from the train to announce my arrival-- ab VT door nahin!!!!

But they told me, to get off at Borivili, that being the nearest station to their place.

The whole dream sequence went kaput as I alighted at Borivili.

Finally I went to VT station 4 and half years after I arrived in Bombay. That too to pick up a friend who insisted on a taxi.

But jealousy took over me and I refused to give him the pleasure of experiencing the dream, that never came true for me.

I got him home in the local.

When you are on the stage you can spot your loved ones in crowd.

How effortless is it made to look, huh? Your guy (or gal) is on the stage, either singing a song, or receiving an award, or doing an animated dance and even with all the preoccupation of a flawless performance is able to spot that one face in that see of faces, albeit being in the dark. Why, young kids 5-6 years of age spot their parents in the last row during an annual day function.

My experience says its bullocks. I went to collect my award and couldn't tell who was sitting in the first row, let alone all the way to the back of the hall. Those glaring lights coupled with the nervousness is the closest I have come to dare in the headlights kinda situation.

Till today whenever such a scene comes on TV or in one of the films, my Mom teases me - And you couldn't even spot us!!

There will always a parking spot when you reach your destination.

Mind plays a song - 'Rote Huye Aate Hain Sab'â€¦ though I'm not playing the stand up stunts, I'm riding the bike in style, feeling very Amitabh. That and from watching in numerous films, how a hero just parks his bike and rushes inside the building with panache, was enough for me to repeat the act.

I parked the bike in style. Put on the glares, looking into the mirror, treaded through my hair and kicked the side stand into place. Got off the bike in vogue, feeling some eyes on me looking in awe, I strode into the building.

Cut to - I walk back out of the building and there's no trace of my bike. There was a chalk sign saying - Bandra Traffic Control. It was towed! I had parked in the No Parking zone. And then I looked around, the same guys were actually laughing at me.

Every time I ascend the steps of the temple, some iconic scenes and songs play in my mind. Aaj khush toh bohot hoge TUMâ€¦ Maine tumse kabhi kuch nahi maangaâ€¦ Lekin aaj maangta hunâ€¦ Meri maa mujhe wapis de deâ€¦ Then - Tere darpe aya hunâ€¦ Kuch karke jaaungaâ€¦ Jholi bhar ke jaaunga ya marke jaaungaâ€¦ and dramatically I feel God always caves in to the bargain. Then when I reach up, I expect the winds would be blowing hard, the bells would be wavering, clanking and chiming on their own.

Let alone these special effects, till date, I haven't even managed to get a symmetrical teeka on my forehead. Punditji always seems to be in a hurry and my teeka is always sloppy. And then as I fold my hands by default, I realize that all the drama is imaginary version and I, for real,humbly bow in front of my deity and say a simple prayer and thank Him for all I'm blessed with.

We may be heavily influenced by the films and its effects but then at some point reality checks in.

We realize it all happens only in the films.

But then again, I still can't come to say 'Sorry' or 'Thank you' to my best friends.

I still think, the dogs are really more sensitive to the likes of their masters, though I only wish I knew a magic mantra to win the dogs' favors.

And, I do still feel, VT defines Bombay.

I still can't stop searching for my people in the crowd.

I still feel heroic to ride the bike and feel Amitabh.

My faith in God has be restored by many a magic moments in films and otherwise.

As you read this, you may clap, some other may join you, and the euphoria may be building and I hear an applause.

It all happens only in the films!

(Rajat Aroraa is a screen writer who in the recent past has written hits like Once Upon A Time In Mumbaai, The Dirty Picture and Kick)