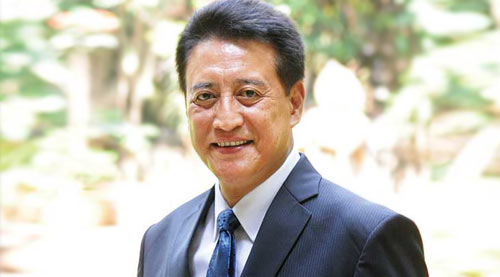 The reclusive Danny Denzongpa, who in a career spanning 43 years has done only 156 films, chats up with Subhash K Jha.

Why have you remained so aloof all these years?
I like to be on my own. I hardly give interviews. And to this day I haven't hired a publicist. I like to give my best to my roles and then I wait for the audiences' reaction. I don't believe in

marketing myself or my film. I avoid all gimmicks. I am not on twitter on any social network.

We see very little of you on screen. Why is that?
I was in the recent Bang Bang. That too because the filmmakers insisted on having me. Frankly speaking, one hardly gets a good selection of roles. I choose the best from what I

get. Once I select a film I give all of myself to my characters.

You've always been extra-selective?
My colleagues who came in with me have done 600-700 films. My average remains three films per year. From the start I had decided not to do too many films simply because I find it

very difficult to shoot during the summer in Mumbai. There are many reasons why I say no to a role. I like to work with people I am known and I am comfortable with. Unfortunately

some of the films that I did recently did not live up to expectations. But Bang Bang is doing very well.

Finally that's what counts, right?
I am not too sure of that. We boast of making hundreds of films every year. But hardly anything that we can be proud of. We go on talking about Gandhi. But it took a Britisher

to make that. Which is really sad.

Do you feel stars today have lost their aura because of over-selling themselves?
When I was a kid I was a big fan of Mr Dilip Kumar. I would be hungry to know more about him. Nowadays every star is an open book. You can go on the computer and get any

information on anyone from any part of the world. Even our own Amitji is on Twitter, Facebook...his fans know every detail of his life. Nowadays everyone has a camera in their phone.

But you've managed to remain aloof?
Yes, I admit I am reclusive. I am basically a loner. I am almost like Fedora.

Tell me about your beginnings? Coming from the North-East

was it difficult for you to establish yourself in Hindi cinema?
It was very difficult. I couldn't get any films, so I went back to the Pune Film Institute where my teacher, the very kind Roshan Taneja got me a job as an acting instructor. I used to help

the newcomers with acting tips all week. On Fridays I used to go from Pune to Mumbai looking for acting assignments. I'd struggle the whole of Friday and Saturday and then go back

to Pune on Sunday. This went on for almost three years.

How did the first acting offers come your way?
I started my career with a bit role in Gulzar's Mere Apne. Then I got the second lead in B R Ishaara's Zaroorat. It was my third film B R Chopra's Dhund which

actually established my acting career. I had a fantastic role in that film. Luckily all these films were hits.

During this time you also sang a song for composer Sachin Dev Burman with Lataji in Yeh Gulistan Hamara?
Yes!! You remember that?! Actually that song has a very interesting history. I was supposed to do the play the part of a Naga rebel. But somehow they decided not to cast me and cast

Sujit Kumar instead. They then offered me a small part of a servant which involved a song 'Mera Naam Aao Mere Paas Aao' which I sang with Lataji. That song became a huge hit.

Finally, though, even that role was taken away from me.

Why and how?
The great comic actor Johnny Walker who had done three films with the same banner (Guru Dutt Films) walked into the director Atma Ram's office asking for a role in Yeh Gulistan

Hamara. Since there was no other option I was told my role was being given to Johnny Walker Saab. I opted out, but the song remained.

So Johnny Walker ended up singing in your voice?
Yes. When I was asked to leave they wanted to re-record the song in Manna Dey's voice. But I had already rehearsed for the song with Burman Dada for many weeks. When I told him

the producer-director's plans, he rang up Atma Ram. Dada was a real Dada. He immediately summoned Mr Atma Ram to his office with all the songs that had been recorded for Yeh

Gulistaan Hamara. After 20 minutes I saw Mr Atma Ram trooping in with all the music. Burman Dada threatened to take all the songs back if I didn't sing 'Mera Naam Aao'. It

was very embarrassing because it looked like I had been complaining. But hats off to Burman Dada for standing up for me.

Can you imagine anyone with that kind of conviction in

today's day and age?
Nobody! Burman Dada was livid. 'You will decide who will sing my song?' he told Atma Ram. After Burman Dada I sang 'Sun Sun Kasam Se' for his son Rahul Dev Burman in

Kala Sona, this time with Ashaji. Then again I sang for Pancham in Mahesh Bhatt's Naya Daur. This one was a duet with Kishore Kumar 'Paani Ke Badle Peekar

Why didn't you sing anymore?
After singing with Lataji, Ashaji, Kishoreda and Rafi Saab I felt I had climbed the Everest. There was nothing more for me to achieve as a singer.

As an actor do you feel you were restricted by your looks?
Most definitely. I feel I've always had to choose from a very limited range of roles. The role that I've done in Bang Bang is hardly path breaking. It's the kind of part I've done

earlier. Writers and directors are struck with a particular image of mine. I sometimes do roles that I'm not fully convinced about because of many factors.

Among your films which are you the proudest of?
I did a Bengali film Lal Kuthi. I had a very good role in that. The story and screenplay were written by me, though I didn't take any credits. Then I love my role in another film

Chopra's 1942: A Love Story and Raj Kumar Santoshi's Ghatak. But the one film that I am really fond of is Shivaji Chandrabhushan's Frozen. I loved shooting that

movie in Ladakh. We shot at minus-30 degrees in February. It won many international awards. Then there was of course Mukul Anand's Agneepath.

That is your most iconic role to date?
You know it isn't about me. It was the film that was powerful in totality. I fitted the character of Kancha Cheena. However Agneepath was not a box office success when it was

Yes, Mr Bachchan had to re-dub his voice?
Yes, that was again a question of his image. He had dubbed it in a gravelly voice to suit the character. When I was dubbing my lines and I heard him I told Amitji that audiences will

You also directed a film Phir Wohi Raat with the very

difficult Mr Rajesh Khanna?
He was not difficult to direct. I'll tell you why I decided to direct a film. This was in the 1980s. There was a trend of dacoit films those days. There came a point when the sets and even

the actors who played my henchmen were the same. I had to take a break from this monotony. That's when I decided to stop accepting new acting offers. I spent that time writing

Phir Wohi Raat. It was an average hit.

Phir Wohi Raat starred the lady who was your girlfriend back then?
Yes, her name was Kim. She did some very successful films like Disco Dancer and Naseeb.

Apparently Parveenji would drop in to your home even when you were seeing someone else?
Yes. We lived in the same building. She was on the 4th floor and I was on the 1st floor. Although I was dating Kim, Parveen would drop in quite often. She was okay then. Later she

became psychologically unstable. She became very sick when she was dating Mahesh Bhatt. Mahesh told me of her condition and I went to see her. It was then that I found out she was

What made you realize how unwell she was?
Because I was friendly with Amitji (Bachchan) she started suspecting I was his agent. She would keep on writing complaints against him to the police and other departments. Then she

came to point where she didn't want to see me because of my friendship with Amitji. I was there for her funeral. What happened to her is very tragic.

Are there any mistakes in your life or career that you'd want rectified?
I've always followed my instincts. I did whatever I wanted to. I don't think I made a mistake. I am Buddhist. And my religion teaches me that nothing is permanent. Every minute we're

changing. Even as I speak to you we're both changing.