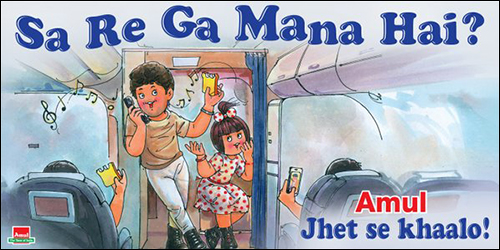 A recent video of Sonu Nigam singing in an aircraft not only went viral on the web but also resulted in the suspension of the crew who were in charge of the airplane. While a lot of people are shocked with the way the airline handled the matter, Amul too expressed its opinion in its own quirky manner.

The recent 'topical' poster of Amul takes a small moment from the viral video of Sonu Nigam singing by recreating the scene with caricatures including the popular Amul mascot accompanied by a tagline that reads, 'Sa Re Ga Mana Hai? Amul Jhet se Khaalo!'

Five crew members of the airline were suspended by the DCGA (Directorate General of Civil Aviation) after they allowed singer Sonu Nigam to sing on the intercom after he was flooded with several requests from co-passengers. The decision also sparked a rage amongst social media where many found it to be an unacceptable move from the airline's side including Sonu Nigam who too took to social networking site to express his displeasure over the matter.