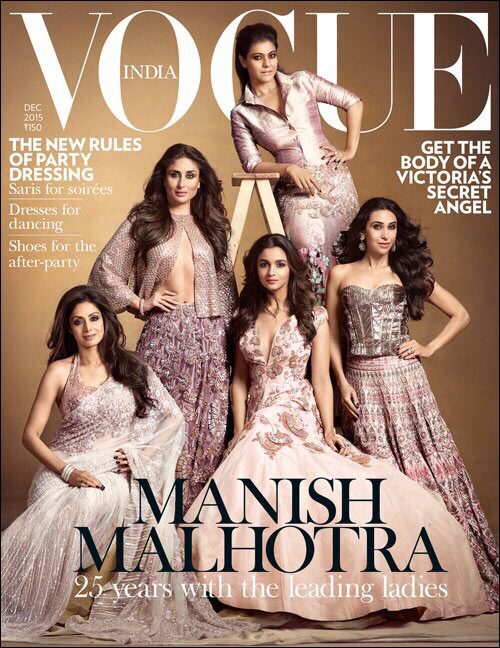 Coming together for the special edition of the year's last month's edition are five divas for the cover of Vogue, namely, award winning actresses like Karisma Kapoor, Kajol and Sridevi with contemporary star Kareena Kapoor Khan and Gen Y superstar Alia Bhatt.

The December edition of Vogue celebrates the 25 years of renowned fashion designer Manish Malhotra, who got his closest friends featuring on the cover sporting the latest ethnic collections created by him and styled by Anaita Shroff Adajania and their look is accessorized with Nirav Modi jewellery. Manish Malhotra, who is thrilled with this, expressed his gratitude towards Vogue on his Twitter handle saying, "25 years of my costume design career and 10 years to my label thank you Vogue india."

On the professional front, Kajol is making a comeback with superstar Shah Rukh Khan in Dilwale and Kareena Kapoor Khan recently wrapped up a schedule of the Arjun Kapoor starrer Ki and Ka. While Karisma Kapoor hasn't decided on returning to showbiz, Sridevi was last seen in the bilingual Puli. Alia Bhatt, on the other hand, is busy with upcoming films like Kapoor & Sons, Udta Punjab among others.