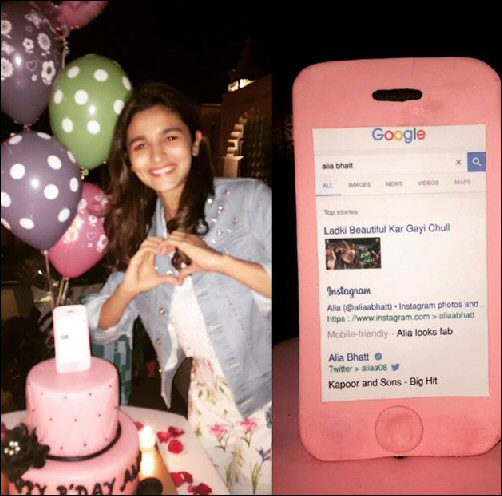 Unlike what Alia and Sidharth fans would like to believe, Alia Bhatt is celebrating her birthday with alleged beau Sidharth Malhotra but the reason is Kapoor & Sons. The duo is currently on a promotional spree for the upcoming family drama along with co-star Fawad Khan and this is the reason why we spotted Alia and Sidharth together in Delhi.

Accompanying the two was also their friend-designer Manish Malhotra. Posting an image with the birthday girl and Sidharth, Manish wished Alia Bhatt saying, "#HappyBirthday @aliaa08 you are the simply #AMAZING have a #wonderful #year #fun #times in #delhi #birthday girl @aliaa08 @S1dharthM #KapoorAndSons #promotions". Though the actress seems to be having a working birthday, we hear that she will plan a bash to ring in her birthday at her new pad in Juhu once she wraps up the promotions. The actress will be shifting to her new residence, a few blocks away from her parents' home.

On the Bollywood front, while her next Kapoor & Son, produced by Dharma Productions and directed by Shakun Batra, is all set to release on April 18, the actress has another release this year, Abhishek Chaubey's Udta Punjab alongside Shahid Kapoor and Kareena Kapoor Khan. She will also soon resume the shoot for Gauri Shinde's next opposite Shah Rukh Khan.