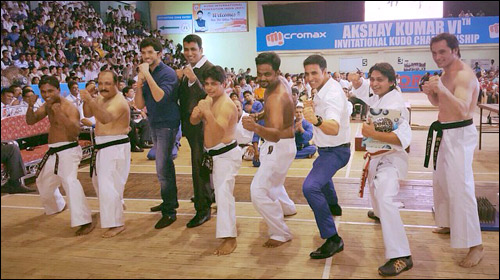 That Akshay Kumar is a fitness icon who religiously worships martial art is a well-known fact in Bollywood. He has always been vocal and active supporter of martial arts. No wonder then, it is indeed his long cherished dream to make martial arts compulsory for students in school, in order for them to learn the art of self-defense. Many may not be aware of the fact that Akshay Kumar, for the last six years, has been sponsoring the lodging and boarding for 5000 kids, who come and participate in a Kudo championship which he had started with his own money.


In the recently held sixth Kudo championship in Mumbai, it was really very heartening to see the enthusiastic participants who had come from all over India to be in Mumbai. Even though there was a cash prize of Rs. 20 lakhs which was up for grabs, but what really made the event special was to see the aspirations and dreams of many people getting fulfilled through Akshay Kumar, who, after getting the School Games Federation of India to give it recognition, is now waiting for the Government of India to gives its nod.


For the uninitiated, Kudo, which was founded in Japan in 1988, is a combination of karate, muaythai, kick-boxing and judo.