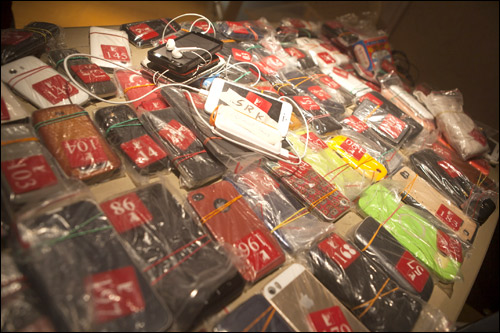 A few days ago we had reported that Shah Rukh Khan has decided to postpone Excel Entertainment's Raees since he first start shooting for Yash Raj Films' Fan. The plot of the film which went on floors this month is strictly being kept under wraps.

Producer Aditya Chopra has gone one step ahead this time for the security of his upcoming film Fan. The entire film is being shot at the YRF studio so that no one gets a glimpse of SRK's look in the film and to avoid the leak of the pictures on social networking sites.

Moreover, the producer has even made a rule of not carrying phone while on the sets. From the actors, director and staff, everyone has been given a security mandate by Aditya Chopra to follow the no phone rule on set. Everyone who enters the shoot in the morning has to keep their phones outside near the registration and only retrieve them in the evening once the shoot wraps. Even Shah Rukh Khan who is inseparable from his phone has to as a mandate keep his phone out with the security. All these phones and equipment which can catch videos and images are kept in a safe lock.

Aditya Chopra is known to be vigilant about films and the content of it while working on any project. Even before he starts working on a film, he considers the security measure he would need to take on them and Fan is no different. Considering that this is superstar Shah Rukh Khan's film and knowing his fan following, the producer was forced to take this step to ensure complete secrecy about the film.

Though Shah Rukh Khan has been roped in for the film, there have been many speculations on the leading lady and names of Parineeti Chopra, Sonam Kapoor, Vaani Kapoor were being tossed around. Recently, it was being said that Ileana D'Cruz was approached for the same. Written by Habib Faisal and directed by Maneesh Sharma, Fan is slated to release on August 14, 2015.