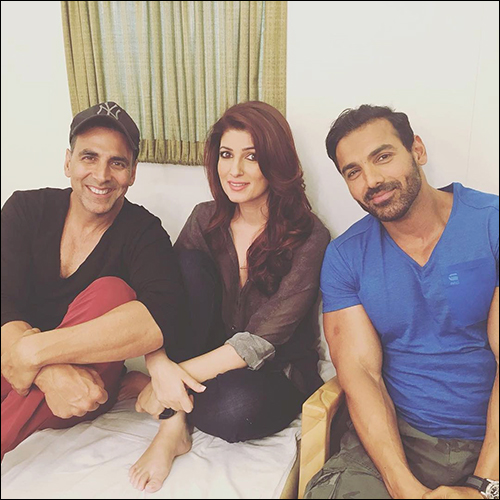 Unlike the cheesy statements, it is really cute to see Akshay Kumar and Twinkle Khanna exchange love banters and adorable captions on social media to express their emotions. And Akshay Kumar did it again when he dropped in on the sets of Twinkle Khanna's recent shoot.


Former actress Twinkle Khanna who prefers to stay away from camera, was recently shooting for an ad when her husband and superstar Akshay Kumar dropped in to meet her. Amidst this, the couple also came across yet another celebrity and it was none other than Akshay's 'Desi Boy' buddy John Abraham. Posting about this on social media, Akshay said, "Free day today, dropped by the wife's shoot with a lunchbox in hand, joined in by buddy John. Feeling domesticated."


On the Bollywood front, Akshay Kumar is juggling between the shoots for Rustom and Housefull 3 while John is busy promoting Rocky Handsome.