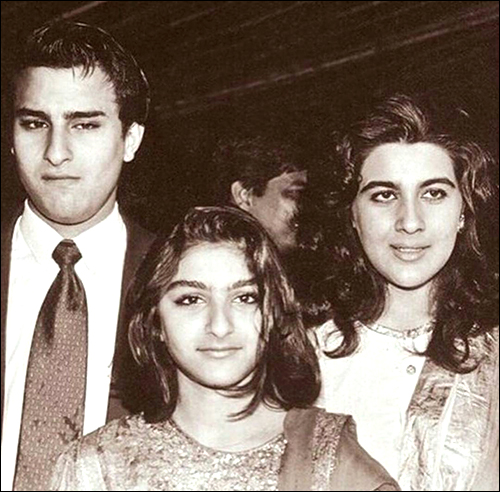 While Bollywood is filled with love stories, here is yet another one that could make you nostalgic. Here's a glimpse of Saif Ali Khan in his early twenties and accompanying him is his ex-wife Amrita Singh and sister Soha Ali Khan.


The love story of actor Saif Ali Khan and actress Amrita Singh, who is 12 years older to him, had left everyone surprised. However, after 13 years of marriage, the two decided to part ways in 2004. The couple also has two kids - Sara Khan and Ibrahim Khan.


Later, Saif fell in love with Kareena Kapoor and the two tied the knot in 2012 after a couple of years of live-in. On the other hand, sister of the actor, Soha Ali Khan, made her Bollywood debut with Dil Maange More in 2004, opposite Shahid Kapoor and is now married to co-actor Kunal Khemu.