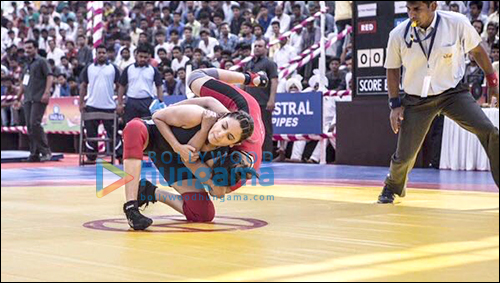 By now, it is a known fact that Anushka Sharma will play wrestler in her next, Sultan. And now, we finally get a glimpse of the actress in action at a wrestling match.


This 'Haryane Ki Sherni' of director Ali Abbas Zafar seems to have put on a few kilos owing to her character in the film. Anushka Sharma will be seen in such a rigorous action packed role for the first time. The actress had to undergo extensive training with professionals for weeks to learn the nuances of wrestling. Interestingly, she will also have the company of superstar Salman Khan who too plays a wrestler in this film. Tweeting this image, Ali who seems to be thrilled with the way the sequence turned out to be, also captioned it saying, "Haryane ki Sherni " dhobi pachad master" @AnushkaSharma in action @SultanTheMovie"


Bringing the unique pair of Anushka Sharma and Salman Khan for the first time, Yash Raj Films' Sultan is the story of a wrestler based in Haryana and is slated to release during Eid 2016.