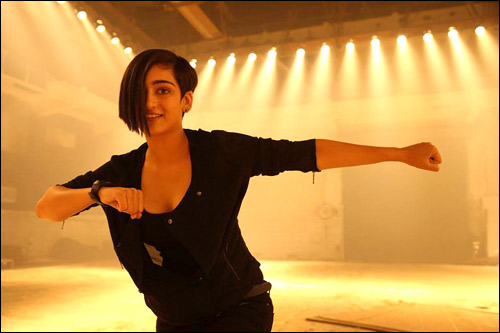 After her parents and sister, Akshara Haasan will soon be making her debut in Bollywood with Shamitabh and what adds more value to this is the presence of evergreen superstar Amitabh Bachchan and South superstar Dhanush, who too will be playing lead roles in the film.

While Amitabh Bachchan's salt and pepper look has already been revealed, we got some more glimpse of Akshara Haasan from the film. Sporting a trendy and unique hairstyle, Akshara Haasan is seen in an all black avatar in this look. Appreciating her acting skills, director of the film R. Balki stated that the newbie will be playing a tough role since she will controlling the two men in her life, who are constantly at loggerheads with each other. Moreover, the filmmaker is very impressed with Akshara's performance and mentioned that though she hasn't faced the camera before, she is a born actor.

Produced by Eros International, Shamitabh is slated to release on February 6, 2015.