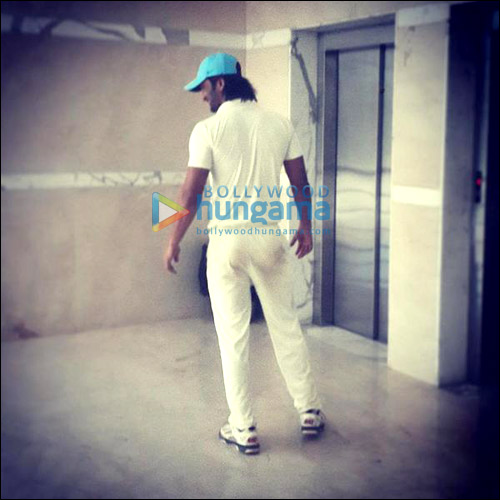 Sushant Singh Rajput has not only been switching roles for his films but the characters he is playing are surely generations apart. The handsome actor is currently juggling between Detective Byomkesh Bakshy which is set in 1940s and Neeraj Pandey's M.S. Dhoni - The Untold Story, a more contemporary story.


Sushant will be seen portraying the role of M.S Dhoni, one of the most renowned players of Indian cricket in contemporary times and the captain of the Indian national cricket team. Though there were many speculations about the film, all of them were put to rest when the first look of the film was released in September. And now, we got a glimpse of the film's lead Sushant Singh Rajput in a 'Dhoni' avatar in an all white cricket uniform while shooting for the film recently. The actor, as prominently visible, has changed the colour of his skin to dusky and also grown his hair long to suit the real life look of Dhoni. The details of the rest of the star cast are still being kept under wraps.


M.S. Dhoni - The Untold Story will be produced by Inspired Entertainment.


On the other hand, Sushant Singh Rajput is all getting prepared for Shekhar Kapur's Paani which is said to go on floors soon.