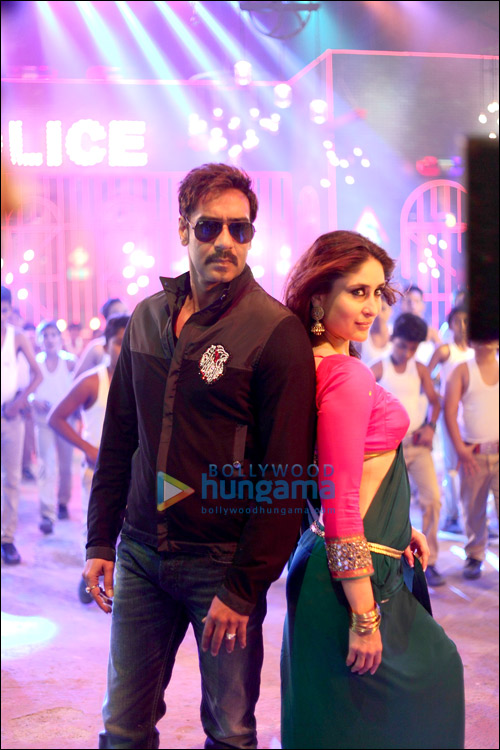 Earlier we had reported that rapper Yo Yo Honey Singh would be composing a special track for Ajay Devgn's film Singham Returns. In fact after the success of 'Chaar Bottle Vodka', 'Party With the Bhoothnath' and the popular track 'Lungi Dance', Singh will be recreating the magic with 'Aata Majhi Satakli' in Singham Returns.

The track which features the film's lead actors Ajay Devgn and Kareena Kapoor grooving with Yo Yo Honey Singh is said to be a vibrant, fun and stylish number. Interestingly, the track was shot in a span of 3 days on a very grand scale, and also features over 100 children dressed in police uniforms.

Choreographed by Ganesh Acharya, the song is sung by Yo Yo Honey Singh and Mamta Sharma. The video of the song features Ajay Devgn in his cop avatar while Kareena Kapoor, who is playing a Marathi mulgi in the film, will be seen sporting a black navari and ethnic jhumkas.

Yo Yo Honey Singh considering has previously worked with Rohit Shetty, out of gratitude, decided to help the filmmaker by completing the song in just 24 hours. In fact, the music composer left no stone unturned in order to complete the song in a day.

Honey Singh not only wrote but even recorded the song in that span, despite the fact that it had many lines in Marathi, a language that the composer is not really well-versed with. Moreover, when Honey Singh made Rohit and Ajay Devgn listen to it, they immediately gave their nod and started preparing to shoot the video. Rohit was also very impressed with Honey's efforts for completing the song in a day.

Directed by Rohit Shetty, Singham Returns also features Amole Gupte and Anupam Kher and is slated to release on August 15.