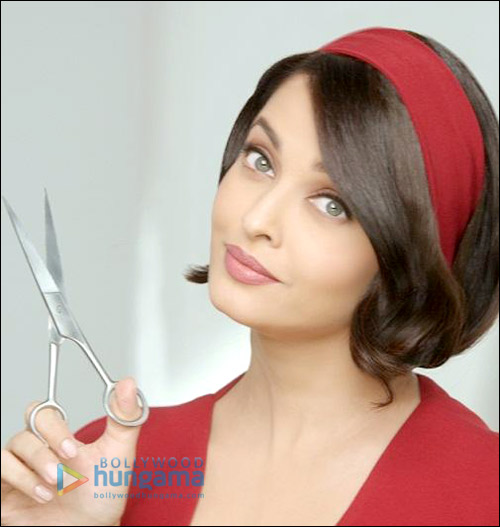 Amidst weight issue controversies, we rarely got a glimpse of the former beauty queen Aishwarya Rai Bachchan. The actress had maintained that she was taking time off to enjoy her motherhood. However, despite a maternity sabbatical, the actress had always made her presence felt in the prestigious Cannes Festival, courtesy, the cosmetics brand L'Oreal.

Now we spotted a much slimmer Aishwarya Rai Bachchan campaigning for the brand in an all red avatar. Looking as young as ever in the short hair do and sporting a head band, the actress was seen posing with a pair of scissors for the latest ad campaign of L'Oreal hair products. Her simple make up and charming blue eyes seems to work its magic even in this photo shoot.


On the other hand, Aishwarya Rai Bachchan has finally decided to make a comeback with not one but two films. She has already started shooting for her film with filmmaker Sanjay Gupta titled Jazbaa, a suspense thriller which also stars Irrfan Khan, Shabana Azmi in the lead along with John Abraham doing a cameo. Also, she will be seen working with Karan Johar for the first time in his film Ae Dil Hai Mushkil starring Ranbir Kapoor and Anushka Sharma.