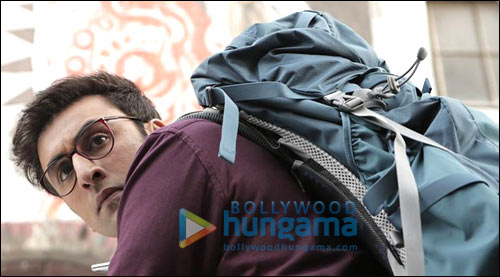 Though we did not get to see much of Ranbir Kapoor in 2014, the actor got involved in many rumours including that he has currently moved in with his alleged girlfriend Katrina Kaif. However, in 2015, Ranbir Kapoor has about four releases which includes Anurag Basu's detective film Jagga Jasoos.

The film will have Ranbir Kapoor aging from a teenager to a forty year old man and here is one of the looks of the actor in the film. This recently released avatar has Ranbir sporting geeky glasses and carrying a grey backpack. The story of the film revolves around a young gifted boy who is in search of his missing father and he is accompanied by his love interest in this mission, played by Katrina Kaif.

Ranbir Kapoor will have many avatars to play this year, along with this. He will be seen as a street fighter and a business tycoon in Anurag Kashyap's magnum opus Bombay Velvet and a nomadic performer in a skit troupe in the Imitiaz Ali directorial Tamasha. He will also be seen playing the role of a thief in the upcoming film Roy, directed by Vikramjit Singh.