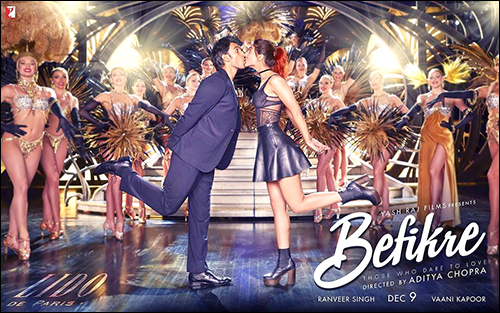 We all know that Ranveer Singh is working in another YRF project Befikre that stars Shudh Desi Romance newbie Vaani Kapoor. Earlier, the actors had released the two posters of them kissing each other. Well, the kissing is not stopping anytime soon and they are back with a brand new poster.

Ranveer Singh posted a picture on his social media accounts with the caption, "Oops, we did it again! @_vaanikapoor_ #BefikreOn9th @BefikreTheFilm." The new poster of Ranveer Singh-Vaani Kapoor's romance, once again, shows the lead couple kissing each other. The set up looks like that the couple had a great time at a party. Ranveer looks dapper in a suit while Vaani is donning a sexy little black sheer dress. The duo has been filming for the film since Mach 2016.

It seems like the makers of Befikre will be releasing something special on the 9th every month. This is really exciting for the fans who are eagerly waiting for this film. This passion project is written by Aditya Chopra himself and it marks the return of Aditya as a director. It is slated to release on December 9, 2016.