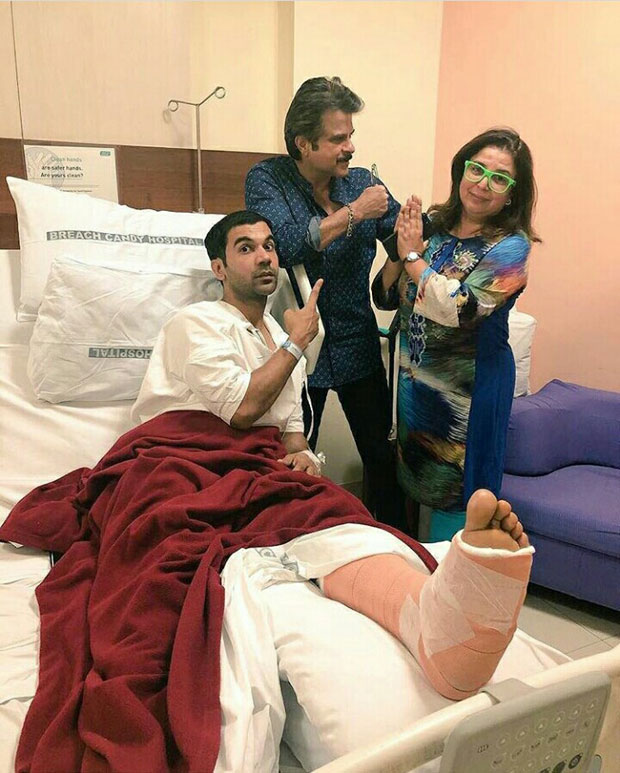 Rajkummar Rao has had a pretty good year and has received praises for his performances in latest releases. Whilst the actor is still basking on the accolades, he suffered an accident on the sets of Farah Khan’s show, Lip Sing Battle. The celebrities participate on the show and have a lip sync battle with one another as one takes the prize home.

Rajkummar Rao was supposed to battle his Bareilly Ki Barfi co-star Kriti Sanon and was shooting for the same when he injured his leg. He suffered 2 fractures and a surgery after being rushed to the hospital. Although in hospital, Rajkummar was smiling away with host Farah Khan who visited him after the accident.

Rajkummar Rao’s Fanney Khan co-star Anil Kapoor also came in to visit him with Farah at Breach Candy Hospital. They trio posed for a picture together.

As we had reported earlier that Fanney Khan’s shooting was delayed due to Rajkummar’s injuries. But, it seems like the Anil Kapoor and Aishwarya Rai Bachchan will continue shooting whereas Rajkummar will resume when he gets well.

Directed by Rakeysh Omprakash Mehra, Fanney Khan is slated to release next year.