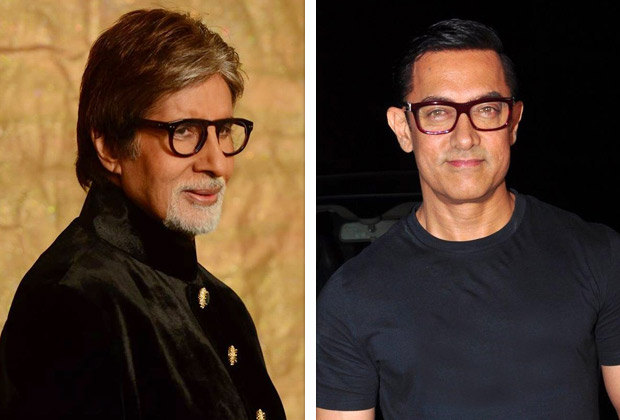 So Amitabh Bachchan and Aamir Khan in the Yash Raj Films biggie Thugs Of Hindostan is a casting coup that will happen. And though Amitabh gave the voiceover for Aamir’s production Lagaan 15 years ago, this will be the first time they will come together as co-actors. However, they almost did co-star twice before, in an ABCL (Amitabh’s home banner) film with Madhuri Dixit that was launched with much fanfare, and a South biggie produced by A. Purnachandra Rao of Andhaa Kaanoon fame that also was to have Rajinikanth.

After the multi-star movie took off in the mid-‘70s, along with the action wave andthe 70mm fad generated by Sholay, incredible combinations were conceived, announced and in some cases even shot in part before being abandoned. Films continue to be shelved even today, but with most of these projects that had casting coups on paper, the movies were dropped because of a lack of combination shooting dates, failure to come up with a decent script that pleased all the stars or lack of financial feasibility.

Here is a list of some of the most interesting ones that we wish we could have got to watch only for their star-value!

Mushir-Riaz’s Vijay Anand-directed film starring Dilip Kumar, Raj Kapoor and Dev Anandwas to be written by Salim-Javed. Salim Khan has revealed that the script could not be worked out to everyone’s approval in the mid-‘70s. And at that time, but for Dev, the other two had switched over to old men’s roles and had lost their popular draw.

Manmohan Desai’s Ghazab (1977) and Ghazab (1978)
The box-office whiz kid announced films twice with this title, one produced by his brother Subhash Desai and another by Rajesh Khanna’s estranged brother-in-law K.K. Talwar. The first repeated the Dharam-Veer combo of Dharmendra-Jeetendra-ZeenatAman-Neetu Singh with Amitabh Bachchan, Vinod Khanna, HemaMalini and Parveen Babi while the latter had Amitabh, Vinod, Randhir and Rishi with Zeenat. Both films were to have the Laxmikant-Pyarelal-Anand Bakshi combination. None of these 70 mm films took off.

B.R. Chopra’s Chanakya Aur Chandragupta
The veteran was to direct this mythological a full decade before his television blockbuster Mahabharat. The 70mm film saw Indeevar stepping into SahirLudhianvi terrain at Sahir’s own recommendation as it was a Hindu subject, and Naushad even recorded a song in LataMangeshkar’s voice before the film was abandoned.

Kaayar directed by Amitabh Bachchan
Announced in the mid-‘70s,  this film was to be co-produced by Prakash Mehra with his regular producer Satyendra Pal. Amitabh Bachchan was to actually direct this film and star in it as well. The stunning credits were for the music—Kalyanji-Anandji and BappiLahiri were to compose separate songs! Later, Mehra was to announce at least one more film with the same title that he had registered!

Sunil Sikand’s Karishma
Had this film been made by actor Pran’s son, SubhashGhai would never have made Karz, for this was the first movie to be announced as a remake of The Reincarnation Of Peter Proud. Shashi Kapoor and Amitabh Bachchan would have been Raj Kiran’s and Rishi Kapoor’s counterparts with Sharmila Tagore as Simi’s character and Parveen Babi as Tina’s! Yes, there was one common point: Laxmikant-Pyarelal were to do the music here as well.

Rajkumar Santoshi’s Power
Probably inspired by the fact that he could pack in stars in AndazAonaApna and Lajja, RajkumarSantoshi brought together Amitabh Bachchan, Anil Kapoor, Ajay Devgn, Sanjay Dutt and some small heroines for FirozNadiadwala, another multi-star film enthusiast in the film Power. Anu Malik was to score music. After the lavish muhurat, nothing was heard again.

Ramesh Sippy’s Zameen
Suresh Malhotra, a financier of sorts, decided to make Zameen with Vinod Khanna, Sanjay Dutt, Rajinikanth, Sridevi, Madhuri Dixit (-Nene now) and Sujata Mehta. Sridevi was at the top, but Tezaab had not yet happened to Madhuri. The film garnered some passing controversy when Alisha Chinoy recorded a song for the film under Laxmikant-Pyarelal and stated disparagingly in an interview, “The song is nice, but it’s for someone called Madhuri Dixit!” Needless to say, she never sang for Madhuri the superstar!

Shekhar Kapur’s Time Machine
With the failure of all time-travel films today, we do not know if we should be happy that this film was partly shot but never completed in the early ‘90s. It had Naseeruddin Shah, Rekha, Aamir Khan and RaveenaTandon in the cast.

Rahul Rawail’s Junglee
After his hit Coolie No. 1 and before Hero No. 1, producer VashuBhagnani had performed the muhurat of Junglee, the amusing tale of a young man brought up amidst animals in a jungle, and now exposed to human beings. Govinda and Kajol were considered the most spontaneous actors then and it would have been fabulous to watch them together, for in the muhurat shot, Govinda sees Kajol and a banana at equal distance and runs towards the fruit!

Pehlaj Nihalani’s Indian
We have never seen Sunny Deol and Aishwarya Rai Bachchan together, but the current censor chief was to bring them together in an action drama with him in a dual role of a terrorist and a soldier, We wonder—was this inspired by Humsaya and Yakeen from the ‘60s, which was also used in the 1999 flop Hindustan Ki Kasam?