BTS, first of their name, breaker of records, makers of carnations! The members of the world-famous Korean group continue to interact with their fans amid these trying times and their live sessions are super fun! From live streams on multiple platforms to sharing photos on their social media platforms, they know how to keep in touch with their huge fanbase. 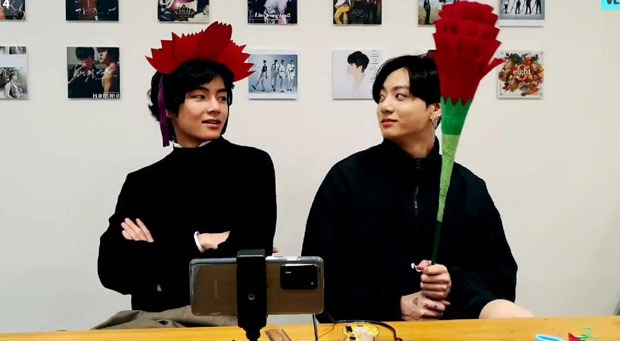 BTS members Jungkook and V did a live broadcast on Tuesday on the special occasion of Children's Day in Korea. It was after almost a year Jungkook did a proper full-fledged live stream with fans after making an appearance in the recent live stream of RM and J-Hope. Since Parents' Day in Korea is celebrated on May 8, they made special carnations for their parents from scratch. V opted to make a cute headband whereas Jungkook made a beautiful bouquet.

During the live chat, they spoke about various topics like how Jungkook is finally getting time to concentrate on learning guitar and investing time in boxing. Meanwhile, V is enjoying writing songs, going to the strawberry farm, and eating lots of delicious food. He also wrote a song for his dad and couldn't wait until Parents' Day. His father teared up.

They even did a live cover of 'Never Not' by Lauv. Recently, Jungkook did an instrumental cover version of the song which went viral on social media as his tweet broke multiple records. After insisting a lot, Jungkook sang along with V and their live vocals are amazing.

BTS is currently working on their next album after their last full-length album, 'Map Of The Soul: 7'.

ALSO READ: BTS vocalist Jungkook drops beautiful rendition of ‘Never Not’ by Lauv and we were just not ready for it