It can't get any cooler and sweeter than BTS! It's been two weeks since South Korean juggernaut dropped their much-awaited second English single 'Butter', followed by a remix 'Butter (Hotter Remix)'. Now, celebrating their chart-topping song which ranked at No. 1 on Billboard Hot 100, the group has released two new remixes along with a new music video. 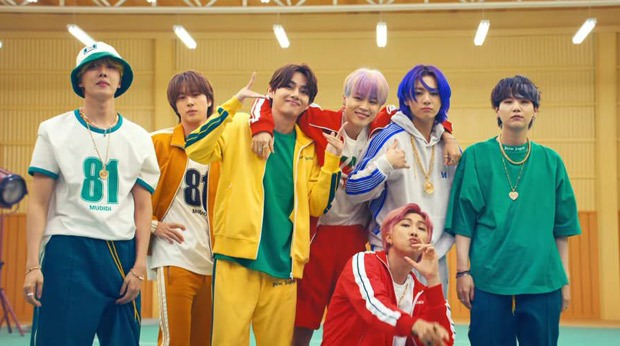 The music video for 'Butter (Cooler Remix)', which dropped on June 4, sees RM, Jin, Suga, J-Hope, Jimin, V, and Jungkook in their athleisure fits in a sports court. The septet freestyles their way in the video ranging from goofy to smooth and slick dance moves. The groovy version of the song truly makes you want to get up and dance with them. While the music video shows the fun side of BTS, the remixes don't take away the essence of the song but add more groovy vibes to it.

The official statement on June 3rd read, "Your support for 'Butter' has propelled the song to the top of the Billboard Hot 100 chart. To express our sincerest appreciation for the interest and love you show for the music of BTS, we are releasing two new 'Butter' remix songs following the previous unveiling of 'Butter (Hotter Remix)' that combines the hit song with new musical genres.

"'Butter (Sweeter Remix)' infuses R&B vibes to the original’s bouncy mood, and the guitar sounds of 'Butter (Cooler Remix)' will wash over you like a refreshing breeze. We hope each and every one of your days is filled with joy as you spend it with the delectably diverse musical flavors of 'Butter' remix songs," it read.

The pop icons debuted the performance at Billboard Music Awards 2021 followed by a second performance at The Late Show With Stephen Colbert. They made an appearance on the Good Morning America 2021 Summer Concert Series on May 28 and performed 'Butter' and 'Dynamite'. BTS recently announced the online live-streaming event BTS 2021 MUSTER SOWOOZOO, held in celebration of the 8th anniversary of BTS and ARMY.