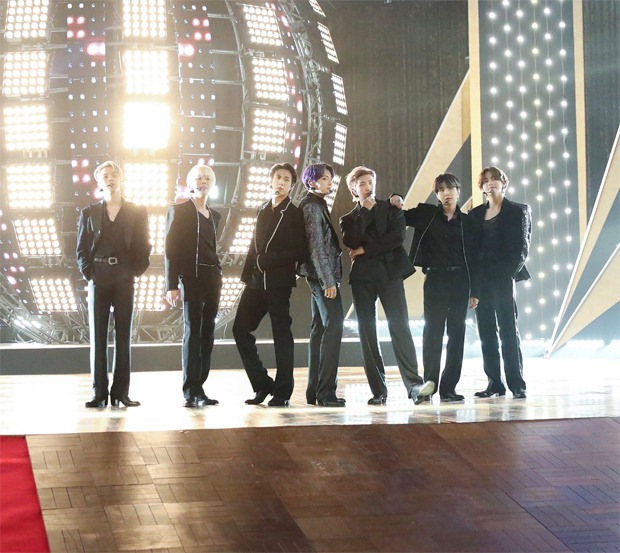 Starting with RM, Jin, Suga, J-Hope, Jimin, V, and Jungkook who are backstage gearing up for the performance, the septet donned sharp suits to head to the stage for their performance. They dived straight into their crisp choreography on -- which the group then translated to the recreated version of the BBMAs red carpet. Each move was alluring, the members were charming, and the elevator bridge part from the music video was transformed into the sexiest dance point routine with their smoldering looks and pelvic moves. The performance ended with the glowy stage with BTS showing their star power while shining through the city.

Performing all the way from Seoul, BTS recreated the 2021 Billboard Music Awards red carpet and stage - once again making it clear that no one is doing virtual performances like them. The stage had music instruments, it was recreated keeping the award show in mind and the performance was absolutely LIT. This is only the beginning of the many performances they have planned for the fans.

Not only their performance which was the highlight of the night, but the septet made a clean sweep. They were nominated in - Top Duo/Group, Top Song Sales Artist, Top Social Artist, and Top Selling Song. They won Top Social Artists five years consecutively whereas won their second Top Duo/Group award at the BBMAs.

Their latest single 'Butter' is a dance-pop track that easily becomes listeners’ favorite earworm, with its distinctive baseline and crisp synth sounds. YouTube confirmed on May 23 that BTS' 'Butter' "set a new all-time 24-hour record of 108.2 million views, surpassing their own 101.1 million view record for 'Dynamite' in the first 24 hours. The band now holds the No. 1 and No. 2 record spots on YouTube's All-Time Top 24 Hour Music Debuts."

It's been than a year since BTS released their first-ever English single 'Dynamite' which propelled them to No. 1 at Billboard Hot 100 and earned their first Grammy nomination in the Top Duo/Group category. Now, with the new dance-pop track, BTS surpassed their retro-theme disco track's YouTube record.

Meanwhile, next up, BTS is kicking off Good Morning America’s Summer Concert Series on May 28.