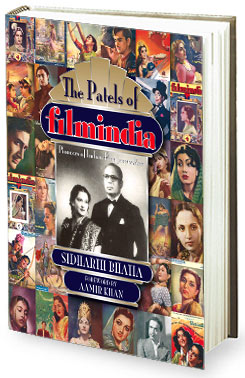 Baburao Patel and his magazine Filmindia (which was later rechristened Mother India) - It can be said that hardly anyone from the current generation would have heard of it. Not even the hardcore film buffs as well. In fact why just the current generation, even the one before this can be expected to be oblivious of this once famous magazine which actually celebrated 50 years of its existence before it was shut down in 1985. In the current times when glossies are almost on the path of extinction and online medium is the quickest source of entertainment, it is but natural to be unaware of what Filmindia stood for.

However, for those who loved their dose of film information in the world of 50s and the 60s, Filmindia was a source of entertainment that brought 'aam junta' closer to the happenings in the world of films, which wasn't Bollywood then. The pioneer who put it all together was Baburao Patel, a fiery journalist, whose pen was known for being brutal with brickbats and charming when it came to bouquets. In his endeavor to give a certain standard to film journalism, he was supported by his wife Sushila Rani.

The Patels of Filmindia is homage to the couple (who are no more) and is put together by author Sidharth Bhatia.

Honestly, when I caught hold of the 170 odd page coffee table book, I was excited. After all, I had briefly heard about Baburao Patel in certain features and was intrigued to know what made him so special. In today's times when there are hundreds of journalists and dozens of critics, neither good nor bad words from any particular individual is 'taken to the heart', either by the members of the film industry or those from the audience. With every person with a Twitter account a critic in himself/herself, just 140 characters put together in a matter of seconds is what a review (unfortunately) stands for.

Hence, I was intrigued to know about the legacy of Baburao Patel and his work. As it turned out though, the book managed to excite only in bits and pieces. The main reason behind that is that it all actually turned out to be a biography of the Patel couple which actually serves little or zero interest for a reader. You want to know more about their work, their thought process behind what they wrote, the reactions from the members of the film fraternity, the criticism on their, the works. However, to know about the life and times of a critic, who (with all due respect) was from a generation ago, is hardly relevant.

This is what happens though as you get to read about the love story of the Patels, their marital life, the past life of Baburao, his personal triumphs and tribulations, his struggle during the emergency, his conflicts with the politicians and fellow journalists, and more, which makes you lose interest with every passing page. Yes, in between you do get excited on seeing some posters from the era gone by. A few advertisements that appeared in the magazine are eye catchy too, and so are the Questions and Answers that Baburao used to answer for the readers. However, it all becomes redundant after a while.

You do believe that perhaps going through the reviews put together by Patel would be mildly exciting. However, since even those are from the times of the 40s to the early 70s, majority of films are even unheard of and hence there is no point actually knowing what he write about them back then. As for the caustic writing then well, it must have been unique then but in today's unforgiving social media where everyone anyways has a point of view about the films, even that doesn't hold any unique well.

At the end of it all, this one is strictly for the archives and serves little purpose for a reader beyond those who may be close associates of the Patels and still active in the world of films.