The highly awaited collaboration between American singer-songwriter MAX and widely popular musician SUGA of the group BTS titled 'Blueberry Eyes' is here and it is simply romantic. Ahead of his sophomore album launch on September 18, MAX dropped the music video of the track which has Suga's verse in Korean. 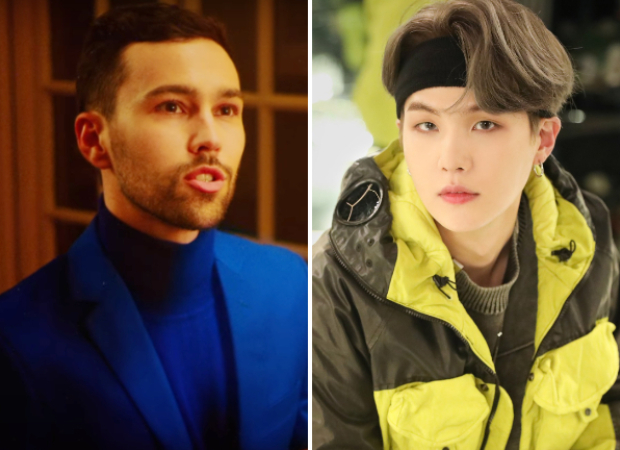 The music video features MAX and his wife Emily play out their love story from where it all began to their wedding to the fact that they are having their baby girl soon. The video was filmed in quarantine and it perfectly depicts their romance. "Kiss you each morning / With strawberry skies / I get so lost in / Your blueberry eyes / I'm running through my dreams / To see you in the light / 'Cause I get so lost in / Your blueberry eyes," croons MAX as he gazes into his wife's eyes as they relive their romance.

Suga, who isn't featured in the video, chose to be part of this track after MAX had sent him the album, as per his interview with Buzzfeed. His verse comes at a very crucial moment when MAX and Emily exchange their wedding vows. Both of them took the initiative to learn the Korean verses as you witness them mouthing the lyrics. As a special ode, a cat's picture is added in the music video as fans dearly call him little 'meow meow'.

While it is a romantic track, Suga expresses his love for those who mean the world to him - his BTS ARMY. "A ray of light that cut through my shadow / You who overturned my life that had been dark / I, maybe, am nothing
Before meeting you, I was nobody / (Yeah yo!) Ay, I who used to nobody / Umm, my life was just about rushing to get through the day / Yeah Our day, Our nights, Our lives / U.A.R.E.M.Y Light / Friends who hold each other up, who hold each other's anchor," he raps his verses. The wordplay with 'U.A.R.E.M.Y' simply depicts his exceptional artistry as he confesses his love to the ARMY in the most beautiful way.

'Blueberry Eyes' is a beautiful collaboration. Sonically, it is a perfect ode to your loved ones, the sound is pretty soothing and the music video is romance-filled. We have already seen the two musicians create magic in their records and we wonder if we can see more in the future too.

In a special note, MAX thanked everyone who have been supportive of this collaboration on his album 'Colour Vision' especially Suga. "Bringing this music video to life has been such a special experience. I wanted it to feel as if Disney magically made a baby with Wes Anderson in the world of Colour Vision with every bit of our souls intertwined," he wrote. "Emily is my actual wife and she is really pregnant right now with our first child, so art imitates life in a fun way with this video. We studied and memorized all of the Korean lyrics to Suga’s incredible and romantic verse and all of the blueberries in the bathtub ended up being reused to create limited edition blueberry dyed blueberry eyes shirts. This video is a piece of our hearts and I hope it sparks the same magic in you viewing it as it did for us creating it. Thank you to Suga for being so brilliant on this song and more importantly for being a wonderful friend. Much love."

MAX spoke to Bollywood Hungama recently about his album and his forming a friendship with Suga over the last nine months or so. Their friendship began when MAX met up with the 27-year-old musician in South Korea when he was on his Asia tour. Cut to May 2020, Suga dropped his highly awaited mixtape ‘D-2’ under his pseudo name AGUST D, four years after his first one. One of the tracks ‘Burn It’ featured MAX which came as a surprise to the fans. Not only was the song very well-received, but MAX was also amazed by the response on social media.

MAX calls this experience of working with SUGA – born Min Yoongi – a surreal moment. “It’s been life-changing honestly. It is my first true collaborative experience with an artist whose native language isn’t my own and finding such a special friendship with someone that I never expected, it’s been wonderful. SUGA and I just connected naturally and I think you can hear that in the very different sounds of the two collaborations, but to me, they both feel authentic to our sounds and stories,” MAX said.