Bigg Boss 15 will witness the grand entry of a special guest which is none other than actress Sara Ali Khan. Sara Ali Khan will be entering the show to promote her upcoming film Atrangi Re which also stars Akshay Kumar and Dhanush. 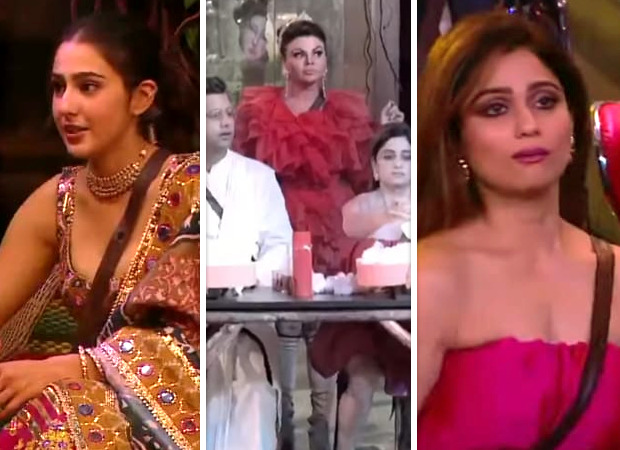 Sara will be having lots of fun on the show with the host Salman Khan. Apart from that, she'll be also entering the main house to interact with the contestants. In the promo shared by the channel, the actress can be seen playing some interesting tasks with the contestants. In one of the tasks, she organizes a special Lavani (traditional dance form of Maharashtra) competition between Rakhi Sawant and Tejasswi Prakash.

The next moment she organises a task wherein a group of three people was made. Each group had had two people sitting while one  standing. The standing one had to answer some questions based on the two sitting contestants asked by Sara. The one whose name would be chosen would be applied with shaving foam on the face. One of the groups was Shamita Shetty, Rajiv Adatia and a Rakhi Sawant. Rakhi was asked whom out of Rajiv and Shamita she doesn't really consider her competition. To which she takes Rajiv's name. Next, Rakhi was asked who does she finds 'dedh shada' (extra smart) to which she takes Shamita's name. Post that Shamita Shetty along with Pratik Sehjapal and Nishant Bhatt were present. Shamita was asked whom she finds unfair in the game and she chooses Nishant's name for it.

The next group which comes in is Karan Kundrra, Tejasswi Prakash, and Umar Riaz. Karan was standing while Tejasswi and Umar were sitting on the chairs. Karan was asked whom does he find the weaker player in the game and he takes both Umar and Tejasswi's name.Hearing this, Sara confronts him and tells him that he is playing very safe and is the weakest player.