In the upcoming Shandaar Shukravaar episode of Sony TV's Kaun Banega Crorepati 13, host Amitabh Bachchan will be welcoming the star cast of the popular sitcom Taarak Mehta Ka Ooltah Chashmah. The team of TMKOC will bring lots of fun and laughter to the show as they engage in a fun banter with Amitabh. 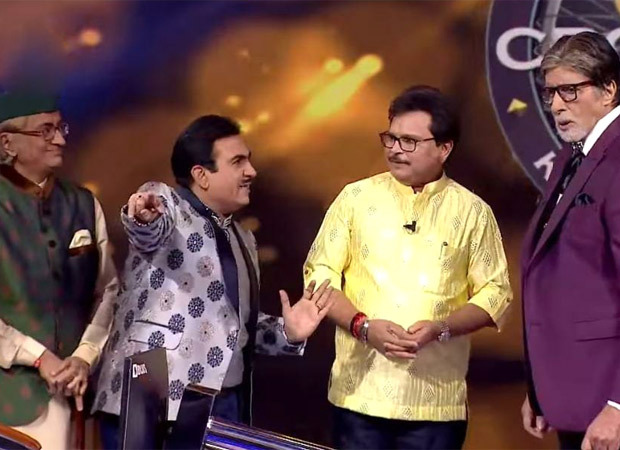 The promos of the same have been shared by the channel on their various social media handles. In one of the promos, Amitabh Bachchan can be seen welcoming the 21 teams members of Taarak Mehta Ka Ooltah Chashmah. Seeing this, Amitabh gets worried about how to get the 21 members seated. To this, Jethalal (Dilip Joshi) gives the solution and says, "Kya karenge, do toh udhary bait jayenge. Baaki neche pangat laga dijiye." Hearing this Big B is left astonished as he reacts with 'Hey Bhagwan!'. Dilip Joshi is also heard asking Amitabh if he still scolds his son and actor Abhishek Bachchan while hinting at Bapu Ji, who often yells at him.

While in another promo Jethalal (Dilip Joshi), Bapuji (Amit Bhatt), Popatlal (Shyam Pathak) and show producer Asit Kumar Modi can be seen taking over the hot seat. Popatlal makes a special request which leaves Amitabh Bachchan in splits. He said, "Sir aap meri shaadi karwa sakte hain? Aata gundata hoon first-class (Sir, can you get me married. I can make dough for chapatis)."

Post that the entire star cast along with Amitabh Bachchan can be seen grooving to 'Garba' ( a traditional dance form of Gujarat) which is the happy ending dance and TMKOC's official grooving anthem.

ALSO READ:Kaun Banega Crorepati 13: Amitabh Bachchan gets emotional as he reveals the reason for hosting KBC in 2000