Dharma Productions is gone dark and venture into the horror genre. The trailer of Bhoot - The Haunted Ship will definitely scare you and manage to send a chill down your spine. It promises an intense horror film. The trailer was launched at an event in Mumbai in the presence of  Vicky Kaushal, Karan Johar, director Bhanu Pratap Singh, Apoorva Mehta (CEO - Dharma Productions), Shariq Patel (CEO - Zee Studios), Shashank Khaitan and Somen Mishra. 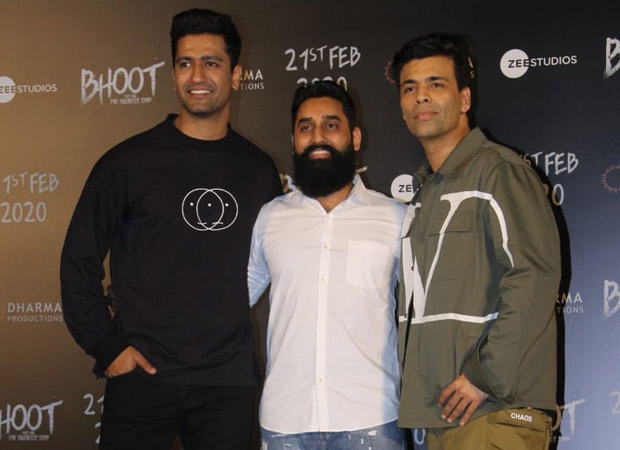 At the trailer launch, producer Karan Johar narrated a near ghost experience he had in real life. “We were going to shoot the title song of Kuch Kuch Hota Hai after two days and Farah Khan was with me for the recee. We saw the location, we had soup and salad all healthy style and then went our rooms to sleep early as we had to be up early the next morning. At around 10 or 11 in the night, there was a loud banging at the door. I went to the door and opened to see Farah Khan standing there dressed in Micky Mouse pyjama, which was very cute and scary and she said, 'I swear there is a ghost in my room and I could feel the pressure of it on me. She told me that she cannot sleep alone and is sharing the room with me. She was afraid through the night. She was looking left and right. Looking at her fear got me worried and scared. That is the only close to ghost story that has happened in my life,” Karan said.

LOL- @karanjohar shares his scary and hilarious ghost experience from the set of #KuchKuchHotaHai. #BollywoodHungama pic.twitter.com/0mKn9atrnS

Bhoot Part 1: The Haunted Ship' is part of the horror franchise that revolves around a ship that lies static on a beach. The film presented by Zee Studios and produced by Dharma Productions is slated to release 21st February 2020.

Also Read: REVEALED: Bhumi Pednekar has a 10-minute-long cameo in BHOOT: Part One – The Haunted Ship

“I make a film because there is a voice I…