Katrina Kaif is best buds with Janhvi Kapoor. After Alia Bhatt, she has taken Janhvi into her wings and helps her train at gym. They work out together and have become pretty close. Yesterday, they were celebrating a birthday and fitness conscious Janhvi was refusing to eat a cake. She just grabbed an almond off the slice and Kat then forcefully fed Ishaan Khatter with a remaining piece. Well, one can hear her say persuasively to eat a half of the slice at least! Ishaan goofily turns his back and flees from the scene. It is quite cute to see Katrina mingling with the young crowd of the industry. Just a few days ago she had shared a picture of Janhvi on Insta where she was seen using the Gym phone and she called her a pretty new gym receptionist. 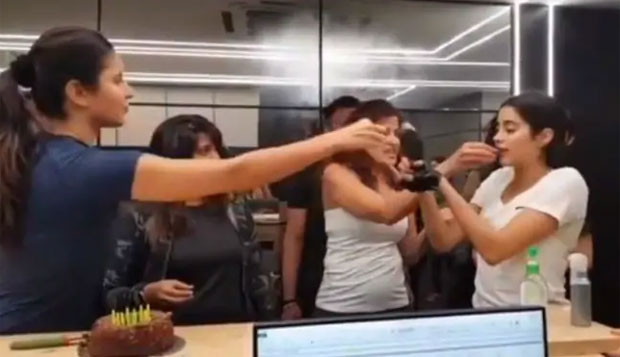 Closeness between Janhvi and Ishaan too is very endearing. The two look pretty comfortable with each other and we wonder what will be their chemistry be like in the movie!

The makers of Dhadak released a new poster of the movie just yesterday and the trailer launch is on June 11, Monday. It is one of the most awaited movies of the year because it is a Bollywood debut of both Janhvi and Ishaan and secondly, because Janhvi’s mom Sridevi passed away while the shoot for the movie was underway. The film is an adaptation of a Marathi movie Sairat and talks about honour killings prevalent in the country due to caste system.

Janhvi also made her magazine debut ahead of her movie release and had her mentor Karan Johar interview her. She revealed what Dhadak means to her and also how her mom Sridevi did not want her to become an actress. Check out this cute Insta video of Katrina featuring Janhvi and Ishaan.

Also Read: Janhvi Kapoor gets a piggyback ride from her gym trainer