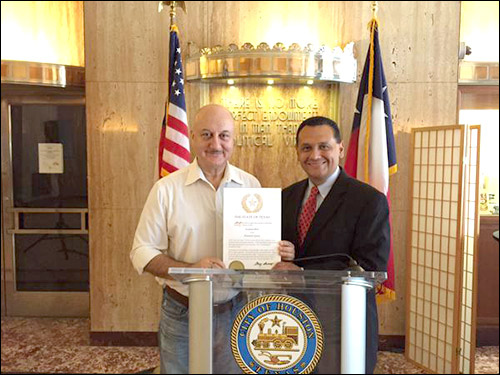 The legendary actor par excellence Anupam Kher will undoubtedly be on cloud nine these days and he has every right to be there. The reason? Well, he has just been presented with the 'Honored Guest' award by Deputy Mayor of Houston Ed Gonzalez on behalf of Texas Governor Greg Abbot for his immense contribution to the world of cinema and art. Just a couple of days back,
he had also been conferred with a 'Senate Proclamation' by The Texas State Senate.

Speaking about the award, a visibly elated Anupam Kher said that God has been extremely kind to him and that he felt honored and proud as an Indian actor. He added that America had been really very
generous to him and his body of work. He also added that, to be honored in America was a wonderful reminder that India had given him amazing opportunities to reach where he is today.

Anupam Kher, who is presently in USA, was earlier appointed as the UN ambassador for the 'HeforShe' campaign for gender equality.