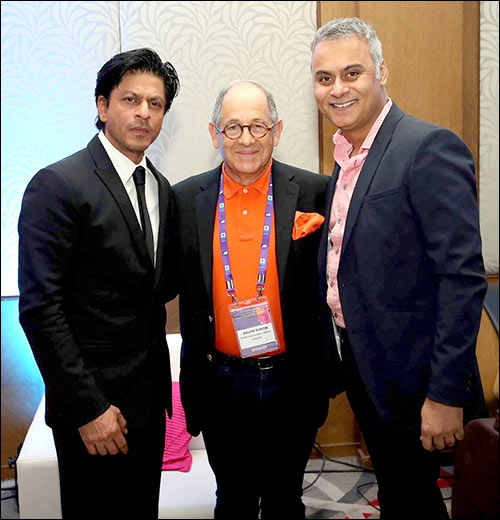 The world of advertising and that of Bollywood have for years gone hand in hand, with numerous Bollywood personalities featuring prominently in advertisements for major brands. But then we are not talking about the adverts we see on television, but instead we are focusing on the recently held IAA (International Advertising Agencies) summit that celebrated its silver jubilee recently. The highlight of the evening that was dedicated to analyzing the future for brand based advertisement while simultaneously focusing on the power of social media was none other than the Bollywood marketing and branding genius Shah Rukh Khan.


Khan who has over the years been accredited time and again for his intuitive and out of the box promotional and advertising acumen featured as the guest of honour at the recently held summit, delivering a speech that touched major points of advertising. In his speech Shah Rukh Khan opened the topic claiming that despite his talk being one that he has delivered often has quite a few additions and changes to it.

If that wasn't enough the master entertainer that he is Shah Rukh Khan who was aptly introduced as the 'Badshah of brands', by summit chairman Pradeep Guha, lived up to his fame giving the audience a glimpse of his antics with the 'Lungi Dance' with ad honchos along with some witty one-liners.


The International Advertising Association is the world's only globally-focused integrated advertising trade association with membership representing Marketers, Advertising agencies and the Media. The IAA comprises Corporate Members, Organizational Members, Educational Affiliates, as well as 56 Chapters with individual members and young professionals from 76 countries including the top 10 economies in the world. LAA is over 77 years' old and is headquartered in New York.

Membership to the Indian Chapter of IAA is by invitation only and IAA has very senior marketing, advertising and media professionals as it members. IAA in India is seen as the most active chapter by IAA Global. India was the recipient of the Best Chapter Award on the last two occasions this was given out, in 2010 and 2014.