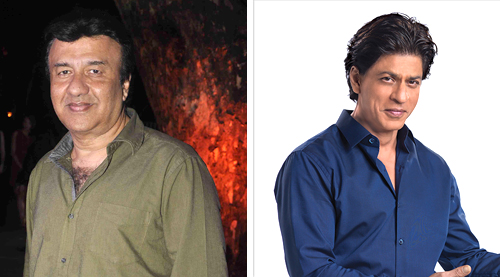 In October 2001, days before the release of Asoka-The Great, Shah Rukh Khan had compared his composer, Anu Malik, with a legendary entity. At that point of time, we

were not aware that they even shared a common birthday-2nd November, besides their mutual bond.

Unfortunately, their professional bonding ceased after the epic Main Hoon Na (2004)-and the reasons for that are as mysterious as Dev Anand never repeating S.D. Burman after Prem Pujari

Nevertheless, the maverick composer and SRK have yet another common quality in abundance-their survival quotient. Shah Rukh is on the ball 23 years after his film career began, and Anu Malik, if

the producers and directors trust him, is still capable of a Dum Laga Ke Haisha even 37 years after he made an insignificant debut in Hunterwali (1978). Being aware of the times and

changing trends and adapting to them without losing their core USP is a common strength.

Shah Rukh even recited a few lines in the song 'Main To Hoon Pagal' in Baadshah and Anu Malik introduced him to the microphone in 'Apun Bola' (Josh), two years after

The remaining songs of these two films did have their (albeit funky and flippant) moments, especially in the title-track and 'Woh Ladki Jo Sabse Alag Hai' from Baadshah and in

and the delectable 'Chori Chori O Gori', while Chaahat saw their only completely forgettable score despite the presence of Mahesh Bhatt as director. Bhatt's Duplicate fared a

And yet the three sixers that this combo hit were Baazigar, Asoka-The Great and Main Hoon Na, and they brilliantly spotlighted their joint potential as mutual sources of inspiration.

Baazigar, the first of the Venus-Anu Malik-SRK combos (Baadshah, Josh and also Main Hoon Na as co-producers with SRK) to hit the screen and their biggest commercial and musical

hit together, had a story behind it: Nadeem-Shravan and Javed Akhtar were to do this 1993 vendetta thriller. But while the duo opted out because they felt the subject had no scope for great music

(!!), Javed Akhtar decided that he could not write eight songs within the short deadline given.

While seven lyricists replaced him, a down-and-almost-out Anu Malik took up the challenge of scoring this 'unmusical' drama. At that point, Venus was one of the few filmmaking entities to stick

loyally to the composer, though Anu had yet to score a comeback with Sir and Phir Teri Kahani Yaad Aayi.

In an encore of how C. Ramachandra scored an all-hit score in Azaad after Naushad rejected the film and Laxmikant-Pyarelal gave their career the final upward boost with Dosti after

Roshan rejected the "story of two beggars", Anu Malik completed his comeback with Baazigar, and Shah Rukh Khan, after the few modest successes he had given till then (Raju Ban Gaya

So that was the other element Shah Rukh and Anu shared: a common career-accelerating blockbuster!

The only other composers who scored high consistently with SRK-Jatin-Lalit-came in to score Shah Rukh's maiden production, but they did not have the versatility to take on Asoka. Anu Malik

thus came in to compose what is arguably not only his career-finest album but also a completely original masterpiece.

As a score, probably due to the common B.C. era timeframe of the story, the composer seemed inspired-song to song-by the magnificent music of Laxmikant-Pyarelal's Utsav (1985), but that was

only in the general 'feel', like 'O Re Kanchi' being comparable to 'Mere Man Baaja Mirdang', 'Roshni Se Bhare Bhare' to 'Saanjh Dhale' and 'Sansanana Nana' sounding in

However, what mattered was that Anu Malik delivered apt exotica for the subject, and a score worthy of the legendary composers of earlier eras that was still relevant to the new generation. This

was probably a case of genuine inspiration, where a composer decided to aspire to a past milestone and almost matched it despite less musical grooming or work experience!

It would not be an exaggeration to say that in the mainstream commercial ambit, Main Hoon Na remains the best of Shah Rukh Khan home production scores to date, while Asoka wins in the purely

Situational lovelies like the much-emulated fusion qawwali 'Tumse Milke', the superb title-track (whose mukhda Anu composed in a jiffy when Farah Khan apologetically told him that her

film did not have a "musical title"!), 'Gori Gori' and 'Tumhe Jo Maine Dekha' all hinted at a wonderful synergy between SRK and Anu Malik besides director Farah Khan in her dazzling

Eleven years down the line, we are still hungry for the next blockbuster as SRK's films has yet to come close musically to the excellence of Asoka, the classy yet simple melodious elegance

of Main Hoon Na or the pan-Indian appeal of Baazigar

Will the November 2, Scorpio-ns sting us again with some lethal melodies?