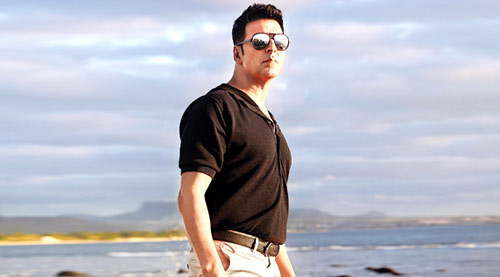 He has been in the business for almost quarter of a century. He has almost 125 films to his names already. Till date he

does three to four films a year as a leading man. He delivers at least a biggie or two every year. And most importantly, he continues to take

maximum risks when it comes to playing across genres. The only superstar actor who hasn't shied away from working in multiple films year after

year, unlike other top superstars who restrict themselves to one or at maximum two films a year, Akshay has gone way past the times when he was

first accused of doing only action films and subsequently only comedies.

Today, after films as distinct as Holiday, Its Entertainment and Baby, which have done a collective business of almost Rs. 300

crores just in India, Akshay Kumar continues to be prolific as ever. So much so that distributors and exhibitors stay on to be gung ho enough

to bring his films in theaters that ensure that at least once a quarter, there are guaranteed footfalls, regardless of the season they arrive

and whether these are holiday or a regular Friday releases.

Here is looking at his lineup ahead which comprises of films as distinct as Gabbar Is Back, Brothers, Singh Is Bling, Airlift and

Gabbar Is Back - May 1, 2015
Genre - Action drama
Director - Radha Krishna Jagarlamudi a.k.a. Krish
With Gabbar Is Back, Akshay Kumar is giving break to yet another director, Krish. Though the filmmaker has been prominent down South,

this is his debut Bollywood sojourn. Akshay turns a vigilante for this action drama and takes on corruption by the neck. The film also brings

him back with Sanjay Leela Bhansali who is producing yet another film with him after Rowdy Rathore, and features Shruti Haasan as his

leading lady. Gabbar Is Back promises some high drama that would be a hardcore commercial affair.

Brothers - August 14
Genre - Family action drama
Director - Karan Malhotra
This is the first film that Akshay Kumar is doing with Karan Johar. What makes it special is the fact that Akshay would be seen in an

altogether different light, as he wears his boxing gloves for Brothers, which is the remake of Hollywood flick Warrior. A family drama

which has Sidharth Malhotra playing Akshay's brother and Jackie Shroff as their father, Brothers is the second directorial outing of

Karan Malhotra who had delivered a major hit with Hrithik Roshan in Agneepath. Akshay Kumar is required to go through quite some

drilling and grilling for Brothers due to its hardcore physical action sequences.

2
Genre - Action comedy
Director - Prabhu Dheva
With Prabhu Dheva, Akshay Kumar has delivered his biggest grosser till date, Rowdy Rathore. Now when the duo is reuniting for Singh Is

Bling, there is obviously a lot of excitement amongst audience, industry and trade. An action comedy with ample dose of romance and music in

it, Singh Is Bliing has been designed as an out and out package affair, and would be a complete contrast to Baby, with which

Akshay has started his 2015 campaign on a winning note. Interestingly, the film would also bring back Amy Jackson into the Bollywood scheme of

things and one looks forward to the 'jodi' of these two good looking actors.

Airlift -Jan 22, 2016
Genre - Thriller
Director - Raja Menon
Not many would come forward and hand over a multi crore affair to a man who has directed an Indie film like Barah Aana before. However,

Akshay Kumar has extended support to Raja Menon who did impress with his Naseeruddin Shah-Vijay Raaz starrer, though commercial success eluded

him. While Nikhil Advani is involved with the film too as a co-producer, Airlift has been designed as an uplifting and entertaining

edge-of-the-seat thriller which tells the story of the biggest ever human evacuation in the history of mankind. Akshay Kumar is required to go

through a remarkable transition for his part in this realistic thriller.

Housefull 3 - June 3, 2016
Genre - Comedy
Director - Sajid-Farhad
Its Entertainment is one film which Akshay Kumar is quite happy to have done and now he is reuniting with the director duo of Sajid-

Farhad for the third installment of Housefull. The film is produced by his friend Sajid Nadiadwala, with whom he has given numerous hits

over the years. With a variety of films under his belt in months to come, Akshay Kumar is going ahead with this franchise which also earned him

his first 100 crore affair. The film also brings Akshay Kumar in a zone where he can let his hair down, especially with co-stars like Riteish

Deshmukh and Abhishek Bachchan. The film also rounds up his play amongst genres.