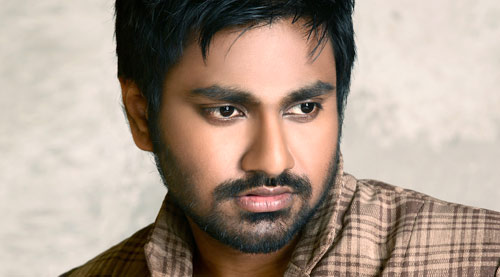 He's in a happy space: Mithoon Sharma, known as Mithoon, has music in his blood-the legendary Pt. Ramprasad Sharma, composer and musician, who had trained so many major names

in film music for generations, is his grandfather. His father Naresh Sharma has been one of the industry's most successful arrangers, while his uncle (Laxmikant-) Pyarelal remains Hindi cinemas'

most successful and 'complete' musician.

Mithoon began his career with two re-creations-'Woh Lamhe' in the Zeher and 'Aadat' in Kalyug, a decade ago. His first original song, 'Tere Bin' (Bas Ek Pal),

however, stormed the charts a year later. And Mithoon was on the gravy train-but of his choice. Anwar and The Train followed. But the best phase began with Aashiqui 2, followed

by Yaariyan and Ek Villain among others.

In 11 years, you have done less than 15 films that too with just some complete scores. Why do you do such less work?

I primarily do music for myself, and I am no entrepreneur. Music makes me very happy. So I do not see the need to go overboard. I also do not believe in the theory of "Out of sight, out of mind".

I have a very strong opinion about many things, and while I know that I may not be always right, I do have my own agenda. I have a strong check-list of 'do's' and 'don'ts'. Like I never do shows

for money, but only concept-based ones. And I have kept up a certain standard of remuneration.

For example, after I was criticized for my music in the 2007 Aggar, I took responsibility and actually went off work, so my next release was after three years in Lamhaa.

What did you do in that period?

criticism for Aggar. I had a commitment to myself.

One reason could be the impression we still get-that your music remains within a fixed parameter and you do not venture outside it?

I do take detours when needed, like in the 'Khalbali' and 'Bulbuliya' songs in 3G, though they did not work so well. I composed the 'Love Theme' in Aashiqui 2. I

do agree that versatility is important in my line, but I am not desperate or trying hard to venture out, because I feel that a certain easy flow must be there in my songs, whether it is 'Phir

Mohabbat' (Murder 2), 'Baarish' from Yaariyan, or the songs I have composed for Ek Villain, Creature and Alone.

There was this producer who wanted me to do a film and warned me that did not want "any hint of Mithoon" in any song. The modalities, however, could not work out.

What is your father's role in your career?

My father is an unofficial institute-he mentors young musicians even today. His contribution in my career cannot be put in words. He gave me the right training and suggested my name to the Bhatts

for the re-creation I did in Zeher, although they had approached him to do it.

He told me, "I can guide you but I cannot give you my story. You have to find your own story and voice." He helped me understand the whole process of music. He was not successful as a film

composer, but I have seen him working with the best composers of his times, and they would request him to arrange their songs, like Anu Malik or Nadeem-Shravan. As a son, I feel that maybe that was

his true calling-giving shape to others' creations. So I also think that success is about responding to my calling, and not conforming to the world's expectations.

Whenever a father is also a composer or musician, it is assumed that he has ghost-composed a lot of the son's work.

I know, but as you can very well know, our styles are completely different, including in the orchestral aspect. Like S.D. Burman and R.D. Burman. They were so different-Dada was much more connected

to nature, and Pancham was so confident in his experimentations.

How did you get Bas Ek Pal after doing two re-creations?

Shailesh Singh, a friend, recommended my name to Onir, and he wanted an electro-based title-track. So I worked on that brief.

Do you keep any stock compositions?

I usually work to a brief. Yes, I do get tunes outside a brief, but I keep those with me and only rarely do I play them out to filmmakers-that is, if I feel they will exactly suit what they need.

And I do not consider these tunes my property; I think they belong to God.

How much involvement can a composer have when he only contributes one or more songs? What is your objection to doing a complete score?

You are completely right. A film composer, ideally, must work on all songs. But the final call is the director's. Also, I am very slow at work. I take one month on one song sometimes, and what is

I am now doing Shivaay on my own for Ajay Devgn. He clarified when he approached me, "I want only you to do all the six songs." It was obviously his vision.

You also started writing lyrics and discovered a poet within.

Well, it started because there was an urgent need, when I wanted Sayeed Quadri-saab for a song in Murder 2 and was randomly writing references to what I needed. When he was not

available, Mohit Suri told me that one of the references I had written was exactly what he wanted. The song was 'Ae Khuda'.

How much have you interacted, if at all, with your grandfather, and your uncle Pyarelal?

I was too young to interact with my grandfather, but I learnt a lot from his theories, which are all documented, and from what my father told me about him. With Pyare uncle, I actually was an

apprentice from 2003 to 2005 when he was doing a lot of non-film work, like his symphony. He's always been a guide. And I have always strived for the standard of quality equated with Laxmikant-

Pyarelal. My father has told me so much about them and I have listened to carefully to the excellence of the flutes of Satyam Shivam Sundaram, the strings of Bobby and the distinctive

Unlike most music makers today, you have very strong roots in your likes and connection with Hindi film music.

I am lucky to have my father expose me to veterans as far back as Husnlal-Bhagatram, C. Ramachandra or Hemant Kumar when I would be initially bored to listen to their songs! Without this anchorage

in the roots, you cannot do good music.

Who are your favourites in film music?

Apart from Laxmikant-Pyarelal, my special favourites are Madan Mohan, M.M. Kreem and Viju Shah. I love some of the music of A.R. Rahman as well.

Madan-ji is a special favourite as his songs had a lot of jazbaat, or feelings, in them. He had an emotional side to him both as a composer and as a man.

What else would you like to do now? And which films are you doing?

I would love to do a film that would need a Hindustani classical album! Besides Shivaay, Shab directed by Onir, and Traffic, which are all full scores, I am working on Tips' next,