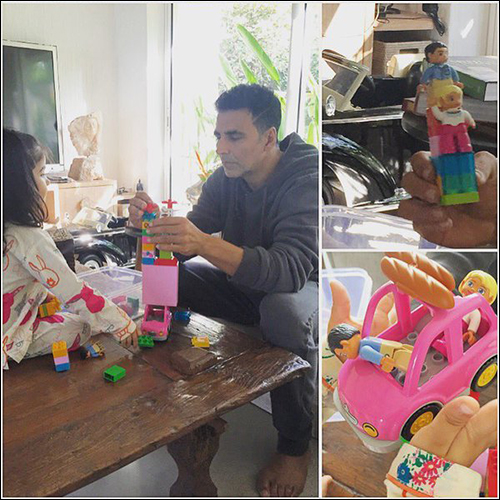 We all know that there is nothing in the world that can come in between Akshay Kumar and his family when he is spending time with his family. And especially if the day happens to be a Sunday, then, it is a strictly family day for this family man.

This Sunday, when Akshay Kumar was engrossed in playing the game of building blocks with his darling daughter Nitara, his wife Twinkle Khanna posted the priceless image on twitter and captioned it as 'Apparently this building is Lanka-2 dolls in the pink chariot(with handy bread rolls)are Sita & Hanuman #Ramayan2015'.

On the film front Akshay Kumar will next be seen in the film Airlift, which is based on one of the biggest evacuations in modern history. Directed by Raj Krishna Menon the film that also features Nimrat Kaur is slated for release on January 22, 2016.