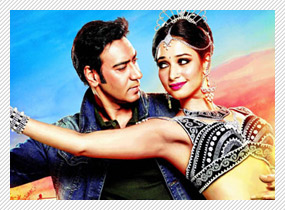 First Look of Himmatwala has done the trick. By unveiling as many as three posters of the film in a single move, director Sajid Khan has made an announcement loud and clear about Himmatwala being a huge 'masala' entertainer in the offering. Though each of his earlier three films (Heyy Babyy, Housefull, Housefull 2) were also aimed at mass as well as class audience, the look, feel, tone and texture of Himmatwala pretty much suggests that it would be entertainment unlimited here.

"That was always going to be the case when you remake a film like Himmatwala. After all, the original Jeetendra-Sridevi starrer had also re-written box office records when released three decades back. With a subject like this in hand which is basically an all around 'masala entertainer' show, it is absolutely certain that Sajid and Ajay (Devgn) would have go all out", says an insider.

As a result of that it was decided that the film's posters would convey the characterization in the right spirit while keeping the theme and mood of yesteryear film intact.

"This is the reason why you see Tamannaah in the leather outfit a la Sridevi. That's an iconic moment of Himmatwala and there was no way Sajid would have compromised on that", adds a source, "Moreover, the film is not just homage to Himmatwala but also set in the 80s."

No wonder, another poster which features Ajay and Tamannaah together is also on the same lines as the original Himmatwala, what with 'matkas', drums and 'Amrapali' costume alike.

"One added 'masala' element from Sajid was to bring a tiger in the picture", says a close associate of the director, "With Ajay and tiger in the same frame, the idea is not just to show him as a brave-heart character. There is a definite part that the tiger too plays in the film and if one considers the temple bells that Ajay is holding, there is a religious significance being conveyed as well. Watch the film and you would know."

We tried to seek further details from Sajid himself but all he said was, "It is too early. Let the shooting begin."