Bollywood actor Ajay Devgn is grabbing headlines ever since the release of Drishyam 2 and the makers of his next film Bholaa dropped its teaser. While a section of fans is still in awe of his performance in the Abhishek Pathak directorial, others are eagerly waiting for the release of Bholaa. Thus, many of them are keeping a keen eye on Ajay Devgn’s Instagram to get the latest updates. While details of Bholaa remain under wraps, the Bollywood star has a special family photo to share with his fans, featuring his son Yug Devgan, and nephew Daanish Gandhi. 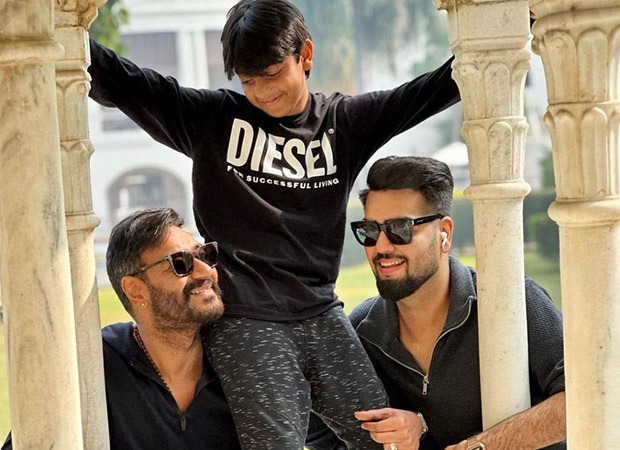 Taking to his social media handle, Ajay shared a photo of the trio on his social media feed on Monday. In the photo, three of them can be seen sporting all-black attire. They also posed with an ear-to-ear smile. Instagramming the photo, Devgn wrote a witty caption, which has a reference to Amitabh Bachchan, Rishi Kapoor and Vinod Khanna starrer Amar Akbar Anthony as his write-up read, “Ek jagah jab jama ho teeno - Baap, Beta aur Bhanja (When all three are gathered at one place - father, son and nephew),” followed by a heart emoticon.

As soon as the Runway 34 actor posted the image, many from his Insta fam reacted with red heart and fire emojis. While a user wrote, “Good fathers raise good sons,” another welcomed the actor in Varanasi. For the unversed, Ajay tagged Banaras as the location in the post.

Coming back to the professional front, Drishyam 2 has already scored a century at the box office. Meanwhile, talking about Bholaa, it will be Ajay’s fourth directorial venture. The forthcoming film is a remake of the popular 2019 Lokesh Kanagaraj film, Kaithi. Along with Devgn, the film will also star Tabu in a pivotal role. It is slated to release on March 30, 2023.