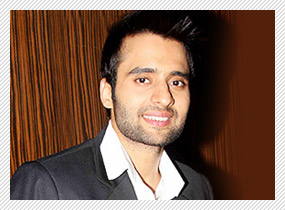 Coming from a filmy family, Jackky Bhagnani was launched by his dad- veteran producer Vashu Bhagnani in Kal Kissne Dekha. However the film bombed badly at the B.O. and a lot of people felt that was the end of Jackky's career. However, the spirited youngster bounced back with vigor delivering the surprise hit of last year- F.A.L.T.U. which was loved by the youth. Jackky is now back with his 3rd film- Ajab Gazabb Love, a mad-cam rom-com that releases this Dusshera (Oct 24). In this exclusive chat with Bollywood Hungama's Nikhil Ramsubramaniam, Jackky shares his experience of working in this film, his plans to do films outside of his home banner and his desire to work with the leading ladies of Bollywood. Read on...

From the promos, Ajab Gazabb Love seems like a mad-cap romantic comedy; tell us more about the film?

Yup...as you rightly said, it's a mad-cap rom-com. There's an equal amount of romance and comedy in the film. We had a combination of mad actors, mad director, and mad music directors working on this film (laughs). The only sane person I think is the producer (Vashu Bhagnani) who managed to get all mad-cap people under one roof to make this hilarious film. I think it's the flavour of the season as it's a Dusshera release- a time when people want to be happy and have a good time with their friends and families. So Ajab Gazabb Love is a complete family entertainer.

Your character Rajveer seems a lot like how you are in real life- coming from a rich family, someone who loves fast cars, dancing etc. So was it easier playing such a character?

Yes Rajveer is very close to how I am in real life but like in the film, if I had to also go all out for the love of my life, I would do it without blinking an eye-lid.

Of course I would love to work with established heroines but that's the producer's and director's call. I am still very new and these are early days for me. But I am sure in the future it would be an honour to work with the leading ladies of our industry.

After working with Vaishali Desai in Kal Kissne Dekha and Puja Gupta in F.A.L.T.U, you are now paired opposite South star Nidhi Subbaiah in this film. How has been the experience?

I can proudly and confidently say that Nidhi is the best co-star I've worked with. She is simply superb. This is her first Hindi film but she has done 7 films down South and is a big name in the Kannada film industry. She knows her job and is a no-nonsense kind of a girl. Having worked in the film industry down South, she is damn punctual and professional. We shared happy vibes and that translates on screen.

The film also has Arjun Rampal and Arshad Warsi in supporting roles. Tell us more about what they are doing in the film?

Arjun has a very strong role. He is playing Nidhi's brother in the film and you will be surprised to see him in new light. His comic timing is amazing. I've known Arjun since I was an A.D. on one of his first films- Deewanapan. Arshad Warsi has a very small cameo in the film but even in that one scene he is so funny that he will have you in splits. He is one of the finest actors of our industry.

How was it working with veteran actors like Darshan Jariwala and Kirron Kher who play your parents in the film?

Darshan sir is one of the finest actors and incidentally he played my dad in F.A.L.T.U. as well. I've known Kirronji also for a long time and she is simply brilliant in the film. My camaraderie with all the actors in the film be it Nidhi or Arjun or Darshan sir or Kirron ma'm was wonderful and it kinda shows on screen.

Sanjay Gadhvi is known more for his action films especially the Dhoom series, how has he done in his first romantic comedy?

He has done superbly in this film. There is a lot of verbal action out here (laughs). Apart from the Dhoom series, Sanjay also directed Mere Yaar Ki Shaadi Hai which I think is an amazing film. It's just that the Dhoom films were so much bigger in scale and setting that Mere Yaar Ki Shaadi Hai got sidelined. He knows his craft really well and we are fortunate to have him as the director of our film.

'Boom Boom' is fast becoming the party song of the year just like 'Char Baj Gaye' was last year. You seem to have a knack of getting these hit songs which the youth seem to love.

I am thankful to God and fortunate that I can be the face of partying when it comes to the youth. After a hard day's work, I too love to let my hair down and party and so do today's youth. If youngsters are liking these songs, it's great.

All your films so far have been produced by your dad Vashu Bhagnani; don't you feel its time to branch out and work with other banners?

It's time no doubt. I am sure people are looking at me more seriously now. And I am sure after Ajab Gazabb Love I hope to get some more interesting films.

The film is releasing with 2 other films on Dussehra (Oct 24) namely Chakravyuh and Rush. Do you think such a clash should have been avoided?

See if I was the producer of all 3 films I wouldn't have released it all on the same day. But sometimes things are not in your control. However from what I know and feel, festivals like Diwali and Dussehra have the capacity of holding up more than one film. The good thing is all 3 films are of different genres so I wish only the best for all the films especially Chakravyuh since Arjun is a part of that film as well and he is very close to me. Besides I am a big fan of Prakash Jha's cinema.

After Ajab Gazabb Love, you would be seen in Priyadarshan's Rangrezzâ€¦tell us more about that film and your experience working with Priyadarshan?

Rangrezz has been a very different kind of a film and experience for me. The film has a lot of action and I am playing a very lower-middle class Marathi guy. It's completely the opposite of what I've done till date. Working with Priyan Sir, Santosh (Sivan) sir has been an incredible experience. It's the best technical crew I've worked with till date. We've finished the shooting and the film is releasing on January 11 next year.