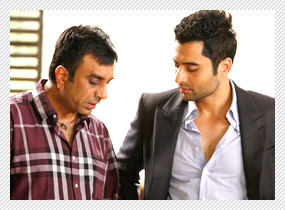 There's a thing about action heroes. No matter what, they have a tendency of getting back in the ring / arena and take over what they rightly

deserved - their title, back. For a director who changed the way audiences percieved action movies has got his cap back on, and, for a change, is directing his first out and

out comic caper titled Ajab Gazabb Love starring Jackky Bhagnani. Well, we are happy to have you back in the ring Sanjay Gadhvi because we are sure you'll

tickle our funny bone with as much zest as you've kicked some a** before in your 'dishum-dishum' movies. On the other end of the phone line, Gadhvi doesn't seem

bemused by his Bollywood success at all. So it comes as no surprise to me that he is directing his first mad and crazy comedy, and one without cynicism. Gadhvi's transfer

to the big league came after he directed Abhishek and John and there after Hrithik in Dhoom and Dhoom 2 respectively. So the question on any actor's

mind would be - How could you resist working with this director? Lets know more from the director himself - Sanjay Gadhvi!

What Ajab Gazab day was it when you decided and said - Yes, this is my next.
Vashu Bhagnani and I have known each other for a very long time now. We always wanted to work together. We had a chance meeting and he wanted some story ideas

from me. I bounced a few ideas across but then Vashuji briefed me about a Telugu film that he had seen. I thought it was a great idea and Vashuji wanted me to direct the

film into Hindi with his son and actor Jackky Bhagnani. Ajab Gazabb Love was born out of that meeting.

You love playing with different genres don't you?
From the little bit you know me and from whatever I've told you in the past, I'd love to direct any genre as my next. For me, what I am looking out is to enjoy and get a

sense of enjoyment in making a movie. That can only come if you take a shot at different genres. I'm not blowing my own trumpet but I have mixed it quite well by

directing movies with different genres. A lot of directors are in the same space when it comes to execution. My filmography says it all I guess. I am looking to do a full on

dramedy (drama + comedy). Ajab Gazabb Love is a crazy comic caper just like Chupke Chupke and Golmaal used to be back in the days.

Jackky is looking leaner and fitter. You are quite known to transform your actors.
It will be wrong on my part to say that I have transformed Jackky Bhagnani in Ajab Gazabb Love. He has worked hard on his body since he started out in this

industry. But this film is more character based with comic scenes in abundance. People will see a Jackky never seen before. You won't see him doing a bare chested action

scenes. I can assure you, Jackky is going to make you'll laugh a lot in this one.

You have teased us well with the teaser of 'Boom Boom'. Another chartbuster track in the making?
I am very happy with the music of Ajab Gazabb Love. I remember when 'Dhoom Machale' was being made, we knew it was a chartbuster track but never

knew it would be that big. But I know with 'Boom Boom' we are sitting on something big. I have a good feeling about this song. The same feeling I had with

'Dhoom'. My seven year old daughter is tapping her feet and jumping up and down after hearing 'Boom'. It's booming in a few days!

Jackky unarguably joins the list of 'dancing greats' from B-town, isn't it?
Yes. We were in Italy shooting a song and the professional dancers were shocked to see that there was a lead guy who could match up to them. He is one of our industry's

finest when it comes to dancing. I've had a pleasure of working with two more - Hrithik and Uday. Jackky is so good at dancing that if you give him regular clothes and put

him with the dancers, he would merge in effortlessly. He has got the potential that not many know of. He is hungry to learn more and that's his good trait.

You've worked with more newcomers than seasoned actors.
I was fortunate to work with almost newcomers in my career as a director. You name Uday, Bipasha, Rimmi Sen, Esha and now Jackky. I am thrilled about the fact that I

can mould them to my wishes sometimes. It's a very satisfying experience to work with these people at the stage where you know they are raw and ready to unleash with

their hidden talent. Jackky Bhagnani is only getting better with each film.