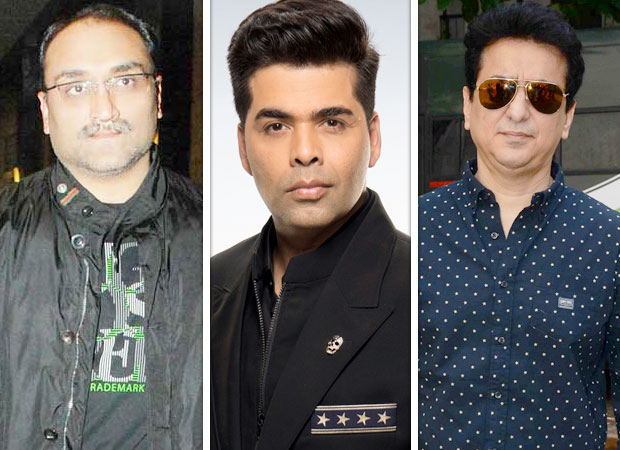 Time and again, it is the superstars who gain maximum credit for the Box Office successes that they deliver. Especially when it comes to the 100/200/300 crore Hits, one tends to acknowledge the three Khans or an Akshay Kumar or an Ajay Devgn for the sheer volume of centuries that they have scored.

However, what cannot be ignored is the fact that behind every such Rs. 100 crore film, there is a producer who takes the biggest risk to invest huge money in hope that the returns would be maximized as well. These are the men who, in true terms, are the star-makers.

No wonder, these are the veterans in the business who are consistently making films, both big and small, are have maximum number of centuries scored between them.

I am talking about Aditya Chopra, Karan Johar and Sajid Nadiadwala who have scored five centuries each and have been consistently delivering successes, hence keeping the flag high for Bollywood.

Let's meet them all!

The name Yash Raj Films stand for quality cinema and though occasionally there are mishaps like Qaidi Band, rest assured when it comes to big ticket entertainment the man who is channelizing it all in the right direction is Aditya Chopra. He scored his first century with Ek Tha Tiger (which could well have been converted into a double century if not for falling short by a crore). This was followed by Jab Tak Hai Jaan and by the time he came up with Dhoom 3, it was time to gear up for a triple century.

After delivering a biggie each with the three Khans, Aditya Chopra upped the ante and results can well be seen, what with a triple century in Sultan and a double century already (and soon to be a triple century) in Tiger Zinda Hai. 2018 should be exciting too as Thugs of Hindostan is set to be another major biggie for Aditya Chopra.

However, while big ticket flicks are bound to step into the Rs. 100 Crore Club, one waits to see if relatively smaller films like Hichki, Sandeep aur Pinky Faraar and Sui Dhaaga: Made In India score big as well.

Dharma Productions is the legacy that Karan Johar is carrying and when he started it all with Kuch Kuch Hota Hai, it was time for some new beginnings. The man has delivered some major blockbusters in the pre-100 Crore club era as well [Kabhi Khushi Kabhi Gham was as huge as it gets]. However, when it came to Box Office being scrutinized much more closely than ever before, Karan struck his first century with Agneepath.

Though this didn't really open the floodgates for Karan Johar when it comes to Rs. 100 crore films as there were some smaller grossers as well in the interim period, a biggie like Yeh Jawaani Hai Deewani came close to entering the Rs. 200 Crore Club. 2 States turned out to be a neat century though and in 2016 Karan Johar scored his first directorial 100 Crore Club entry with Ae Dil Hai Mushkil. The good trend has continued for the filmmaker with Badrinath Ki Dulhania being the latest addition to his repertoire of centuries.

There are huge future plans for Dharma Productions though, what with as many as seven films in different stages of production. While Drive, Raazi, Dhadak, Student of the Year 2 and Simmba would arrive in 2018, Kesari and Brahmastra have already been locked for 2019.

No wonder, Karan Johar is entitled to the tag of being a star-maker.

An industry veteran who has been making films for over 25 years now, Sajid Nadiadwala is one of the youngest filmmakers around with maximum number of releases to his name. Consistent in his belief when it comes to making films for family audiences, Sajid Nadiadwala has been enjoying tremendous goodwill in the industry. That has also translated into a good and consistent run so far with one of the best success rates amongst the bigwigs of Bollywood.

Though he has had some good Hits in the past as well, the advent of Rs. 100 Crore Club has seen him gain an entry there with Housefull 2. The film was a clean Superhit at the Box Office and that was followed by 2 States which reached out to class as well as mass audiences. However, the big shot hit by Sajid was in the form of Kick which straight away found an entry into the Rs. 200 Crore Club. What was further special was the fact that Sajid Nadiadwala also turned director with this Salman Khan starrer and the film stays on to be the biggest grosser of Nadiadwala Grandson.

Post that too the producer has been driving good successes with Housefull 3 emerging as a Hit in 2016 and then Judwaa 2 turning out to be a Superhit in 2017.

While Sajid has already set plans for an eventful 2018 with Baaghi 2 and Super 30, he is turning all the more aggressive for 2019 with Housefull 4 promising to be the biggest ever film to come from his production house. Rest assured, many more centuries are bound to be added for Nadiadwala Grandson in time to come.