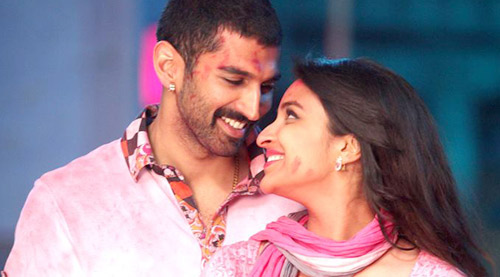 Daawat-e-Ishq released this week and there are some understated gems that Bollywood Hungama would like to share with you!

1. A youngster would be duped by a girl of Rs. 40 lakhs and then further accused of a serious charge. Still, his heart would melt in a matter of seconds when she narrates her sob story and he marries her.

2. Before that, when the duped youngster would agree on a settlement, he would do it only half-heartedly as moments later, he would encounter the girl (with a bunch of friends no less) publicly and threaten her. What if she took the matters to court now?

3. The con game would be put together with such ease that it would seem like a child's play. It is fairly assumed that no one would check Google for a background check

4. The con players never thought that their bank account statements would be referred to at various junctures before being given a go-ahead to take that flight to the U.S.A.

5. A man, who has lived his life honestly for decades and is on the verge of retirement, would have a sudden change of heart just because he gets a scratch on his palm from a minor car accident.

6. A five star hotel would actually allow an outside restaurant owner to come and treat dozens of guests (who are waiting in the lobby no less) with tons of 'desi 'dishes.

7. A daughter and her father would play a silly game of good cop/bad cop and a seasoned businessman, who comes with the capacity of quietly sneaking away 40 lakhs in a matter of hours, won't even realize it.

8. When the climax fight with hardcore goons ensues, a girl can single handedly (well, literally) shoo them all away with a mere sway of her bag.

9. Above all, you promote a film to be a romantic comedy based on the theme of food however, it turns out to be a serious social drama dealing with the subject of dowry, hence conning the audiences.