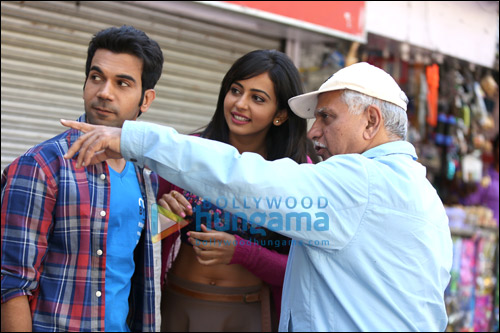 As Ramesh Sippy, the director of the epic film Sholay, is all set to make a comeback after almost two decades in Bollywood, expectations from the film are very high. While Sippy last directed Zamana Deewana, his next directorial titled Shimla Mirchi which went on floor recently.


Rajkummar Rao, who gained fame after his marvelous performance in films like Shahid and Queen, bagged the role of the male lead in this film. In fact, the actor even decided to quit the film Revolution 2020, citing date issues in order to work with Ramesh Sippy. Recently, the actor was spotted along with his co-star Rakul Preet of Yaariyan fame on the sets of Shimla Mirchi engrossed in a scene as their director Ramesh Sippy was giving them instructions. The scene in question is said to be shot at the popular Mall Road in Shimla. It has also been learnt that the scene has Rajkummar Rao searching for the woman he loves desperately amidst the crowded market road.


What also makes the film special is the fact that Ramesh Sippy and his Sholay actress Hema Malini are coming together after four decades for this film. Shimla Mirchi is said to be a story about the intricacies of mother-daughter relation as the two fall in love with the same man.