Ranveer Singh is all set to begin his film ’83 in London in which he is starring as the legendary Indian Cricket Captain, Kapil Dev. The cast and crew flew to the iconic Lords to begin training there before the film goes on the floor in the next couple of days. 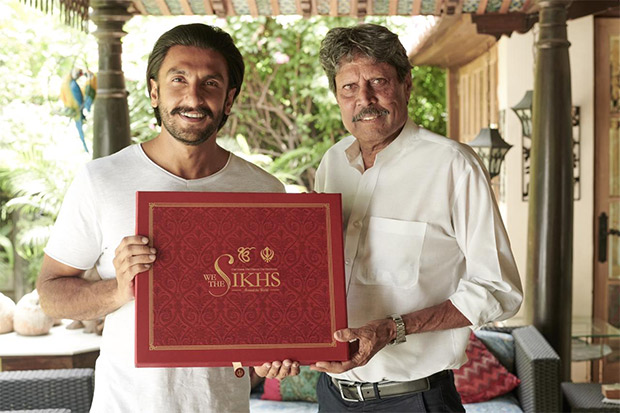 As the actor had spent quality time Kapil Dev in Delhi for a couple of days, he got to learn a lot from him. The actor, in return, received a special gift from Kapil Dev. The cricketer gifted him his coffee table book, 'We The Sikhs'. This was given to Ranveer during his Delhi visit in May.

A few days ago, Ranveer spoke to Bollywood Hungama and revealed what went down during the training period. "We went to Juhu’s ground on the first day, Kabir sir and Sandhu sir were with us. On first day of work on the film ’83, my batting was decent. The report card for my batting was pretty okay and the technique was also not bad. But, bowling was embarrassing. I’m at least happy to report that I’ve come a long way from day 1. It’s been about 5 months of work; I’ve had to also change my body mechanics. My body was not mechanically able to execute Kapil Sir’s bowling action. So, I had to actually train, do some rigorous physical conditioning to change the mechanics of how my body works in order to get somewhere close to that action. But, you’re very right! It is perhaps the hardest part about playing this character is to achieve that distinctive bowling action but I’m at it.”

Directed by Kabir Khan, '83 will bring to light one of the most important events in the history of Indian cricket. The film will be shot at real locations. It is slated for April 2020 release.