On Saturday November 30, an announcement sprang up all of a sudden that turned out as a pleasant surprise. Akshay Kumar took to Twitter to announce that he’ll be presenting with Bhushan Kumar a film titled Durgavati, starring Bhumi Pednekar in the lead. It will be a remake of the 2018 success Tamil horror film Bhaagamathie. The announcement was significant for many reasons. It brought an end to reports of rift between Akshay Kumar and Bhushan Kumar once and for all. Secondly, it proved yet again that Bhumi Pednekar has once again scored a sixer with a film as her in a central lead. 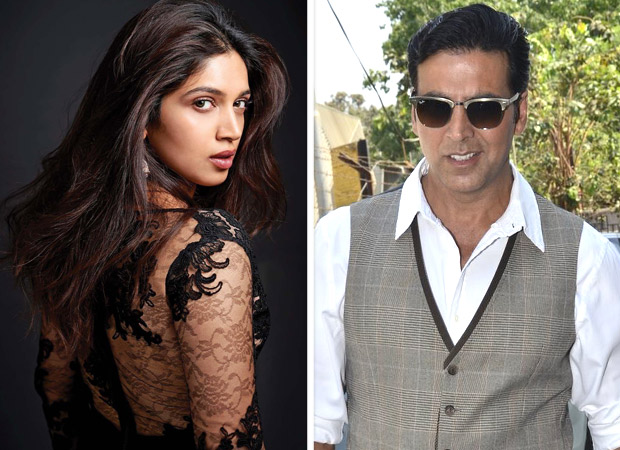 That’s not all. Just 3 days before Durgavati’s announcement, Dharma Productions revealed that their next film with director Shashank Khaitan would star Bhumi Pednekar along with Varun Dhawan and Kiara Advani. It’s rare that two films of an actor get announced within a week!

But then Bhumi has always been exceptional. Right now, she holds the feat of having as many as six films in the pipeline - Pati Patni Aur Woh, Bhoot: Part One - The Haunted Ship, Takht, Dolly Kitty Aur Woh Chamakte Sitare, Shashank Khaitan's untitled next and Durgavati! She defeats Janhvi Kapoor who earlier held the record of having 5 films plus one track in the Netflix film Ghost Stories. Bhumi meanwhile has only full-length feature films and in each of them, she’s playing a significant part!

Even her box office record has been pretty impressive. Bhumi Pednekar started her acting career in 2015 with Dum Laga Ke Haisha. She played an overweight village girl in this flick that was one of the surprise hits of that year. She then vanished for almost 2 ½ years but then stormed back with power-packed performances in Toilet – Ek Prem Katha and Shubh Mangal Saavdhan, two hit films that released within 3 weeks of each other. Again, she had zero releases in 2018, barring a lovely part in Zoya Akhtar’s story in web film Lust Stories. In 2019, she had four releases. She started the year with Sonchiriya, a dacoit drama that bombed big time despite appreciation. This has been her only flop till date. Her next flick was the Diwali release Saand Ki Aankh. Despite playing an old woman, criticism around the make-up and lack of screens given due to extreme competition, Saand Ki Aankh emerged as a decent success. Two weeks later, she was back to entertain audiences with Bala. She played a dark-skinned, rebellious girl in this Ayushmann Khurrana starrer that entered the Rs. 100 crore club as well. Her final release – Pati Patni Aur Woh – releases this week and seems quite exciting. It co-stars Kartik Aaryan and Ananya Panday and going by perception and talk among trade, there’s little chance that Pati Patni Aur Woh will not succeed at the ticket window!

Even her forthcoming films seem very promising. She’ll commence 2020 with Bhoot: Part One - The Haunted Ship, a horror film co-starring Vicky Kaushal. Dolly Kitty Aur Woh Chamakte Sitare is directed by Alankrita Shrivastava, whose 2017 film Lipstick Under My Burkha was not only critical success but commercial too. Dolly Kitty Aur Woh Chamakte Sitare hence has the chance to succeed. Shashank Khaitan’s film meanwhile will surely be a mass entertainer, going by his previous films – Humpty Sharma Ki Dulhania and Badrinath Ki Dulhania. Takht is an ambitious period drama directed by Karan Johar and also featuring Ranveer Singh, Alia Bhatt, Kareena Kapoor, Janhvi Kapoor, Vicky Kaushal and Anil Kapoor. It’s one of the most anticipated films. And Durgavati is a remake of a successful film and hence, it can also score.

Once Pati Patni Aur Woh releases on Friday, Bhumi will end up having 4 releases in 2019. In 2020, at least 3 of her films will make it to cinemas. That’s an unbelievable record for an actress who’s having proper lead parts in all her films. Keeping in mind this factor and her box office record, one can’t help but draw parallels to Akshay Kumar. He too arrives with at least 2-3 films in a year and almost all of them are successes. Hence, in a lighter vein, it won’t be wrong to call Bhumi Pednekar the ‘female Akshay Kumar’!

A further detailed analysis of her films throws even more interesting aspects. Bhumi Pednekar is a YRF (Yash Raj Films) talent as she debuted with their film. Usually, such actors always have at least couple of films with the banner. But Bhumi has done just one film with them, which was Dum Laga Ke Haisha. Interestingly, three of her upcoming films - Bhoot: Part One - The Haunted Ship, Takht and Shashank Khaitan film – are produced by Karan Johar’s Dharma Productions. Not just YRF and Dharma, she also has had the fortune of working with producers like Aanand L Rai, Maddock Films and Ekta Kapoor and directors like Abhishek Chaubey, Amar Kaushik, Alankrita Shrivastava, Shashank Khaitan and above all, Karan Johar!

Needless to say, Bhumi Pednekar is on a roll and if continues this winning streak, she’ll be a one-of-its-kind success story!